All week, Austin's masters of theatrical fantasy show you how to make an out-of-this-world look 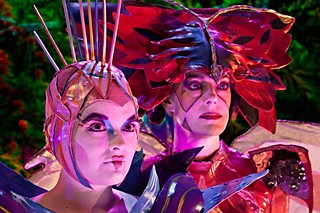 Melissa Vogt-Patterson as Octia and Eryn Gettys as Karnika, from Octia of the Pink Ocean (Courtesy of Sergio R. Samayoa)

When you have Syfy running a reality series about fans creating costumes for conventions and CNN covering cosplay at Comic-Con, it's safe to say this once-fringe pastime has hit the mainstream. And when the marketplace is working overtime to turn a buck on the popularity of people fashioning fantasywear, the announcement of a "Cosplay Expo" might warrant a bit of caveat emptor. Unless, that is, said Expo is produced by Vortex Repertory Company. The Vortex was cosplay before cosplay was cool. For more than 20 years, it's been conjuring fantastic worlds peopled by humans and transhumans wearing extravagant, artfully crafted outfits in musical fantasies such as Sarah Silver Hands, The Dragonfly Princess, Pythia Dust, and the cybernetic operas Elytra and The X & Y Trilogy.

The artists behind these productions have considerable knowledge and skills to share – which is just what they'll be doing nightly Aug. 10-16. Evenings begin with Cosplay Happy Hour (5pm), followed by 90 minutes of workshops and presentations with artists such as composer/imagineer Chad Salvata and Vortex Artistic Director Bonnie Cullum (6pm). Then comes a look at a new operatic fantasy from Salvata and Cullum, though this one has taken the cybernetic cinematic: Octia of the Pink Ocean is an 80-minute film exploring concepts and characters from the epic ethos universe. After each screening (8pm nightly, also 10pm Friday-Saturday) will be a Q&A with Octia's creators.

(all start at 6pm unless otherwise noted)