This Is Our Youth


"Even nowhere can be someplace special," wrote Peter Marks in his New York Times review of This Is Our Youth in the mid-Nineties. Punchkin Repertory Theatre's production at the Off Center beautifully exemplifies his idea in many ways. The setting is specific – an Upper West Side apartment in 1982 – but the brokenness that's evident from every angle constitutes a vast "nowhere" that permeates the far reaches of Kenneth Lonergan's story.

This brokenness is first noticeable in Dannie Snyder and Stuart Feild's fantastically conceptual set, with its jagged, disconnected bricks that hang from the ceiling and emanate from appliances. The very incomplete but foreboding apartment wall creates a visual sense of entrapment, from which escape is still possible if its prisoners can beat the drying mortar. It's a metaphor for the vices of the plot, including broken families and, especially, drug activity.

Although the play's three characters experience brokenness in unique ways, the acting behind them is in no need of mending. This is seamless, spot-on characterization – some of the best I've ever seen in a three-hander. Eric Austin never falters in his portrayal of drug dealer Dennis, showing amazing stamina and energy in an intensely angry role. Time and again, Austin proves his stunning ability to turn on a dime from the abrasive and abusive character we see on the outside to the sympathetic soul we know resides deep beneath.

As Dennis' 19-year-old friend Warren, Clint Harris delivers a quirkiness that one would be hard-pressed to beat. The off-the-wall physical profile he creates for his character is as consistent as it is complex. We all know someone who reminds us of Harris' Warren, yet the spin is all his own. Having stolen $15,000 from his father, Warren is in some hot water, and he's bringing buddy Dennis along for the ride. Harris and Austin play off each other with wonderful chemistry, never missing a beat or opportunity to put their prowess for subtle choices into action.

Enter Hannah Burkhauser as Jessica, Warren's crush. In many ways, Jessica embodies the dichotomy of Dennis and Warren in a single character. Like Dennis, she's raging with anger one moment, but she's geeking out over Warren's childhood toy collection the next. This is the essence of Jessica, which Burkhauser brings to the fore within her first moments onstage. She's a woman of a thousand faces but no masks; each expression is calibrated in moment-to-moment response, as in a master tennis game. If acting is reacting, these three actors are exemplars of the adage.

Director Dannie Snyder has done especially fine work here. The production's vision is cohesive, its moments always motivated. Snyder has seen to it that the details aren't left behind and that the big picture remains fully intact.

READ MORE
More This Is Our Youth 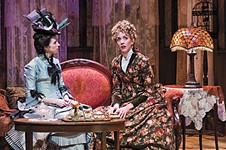 This is Our Youth
Local Arts Reviews