'Buy What You Love' 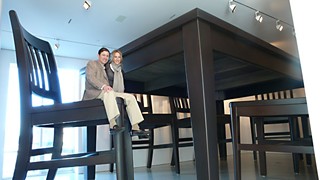 "A Secret Affair: Selections From the Fuhrman Family Collection," now in its final weeks at the Contemporary Austin, has received wide-ranging praise for the breakaway curatorial tack of new Executive Director Louis Grachos, and for the celebrity-level artists whose work, until now, hasn't been regularly exhibited in Austin.

Glenn Fuhrman is a co-managing partner at MSD Capital (the private investment firm for Michael Dell and his family). a trustee of the Tate Americas Foundation and the Museum of Modern Art in New York, a board member of the Institute of Contemporary Art in Philadelphia, and the founder of the FLAG Art Foundation. He studied art history alongside finance and began collecting contemporary art shortly after beginning his career at Goldman Sachs, having been impressed by the collection of contemporary photography in its offices. Twenty-some years later, Fuhrman has been listed in Business Insider's 25 most serious Wall Street art collectors, and, with his wife Amanda, in ARTnews' top 200 most active contemporary art collectors, as well as a pile of other lists that basically say, "These folks are a big deal."

Fuhrman was kind enough to answer our questions about his collection and what he's gained by living with contemporary art.

Austin Chronicle: You've described being inspired early on by private collections on public display in London. In a way, you've brought that paradigm to Texas by showing art from your collection in Austin. Do you hope to inspire future collectors when you lend work to institutions?

Glenn Fuhrman: It's not something that I specifically think about in terms of future "collectors." I do have a keen awareness, however, for the way looking at, and living with, contemporary art affects my life and love the idea of allowing other people to potentially have that same experience. You don't have to be an expert or super knowledgable about art to have an object move you in some very positive way, and that is what I most like about good art. Providing opportunities for other people to have that experience is exciting to me.

AC: Any advice for new collectors?

GF: Buy what you love, and always buy with your eyes and your heart – not your ears.

AC: Your tastes in that regard seem very consistent. The works in "A Secret Affair" share common threads: Humor seems very important to the work you collect; the same could be said of mystery; and much of the work addresses the human form. Is this representative of your collection, or are these threads unique to the curated selections for Austin?

GF: Some of these are more threads that Louis saw and decided to focus on, and selected works accordingly. In general, we are drawn to works that have a real aesthetic appeal but also some additional layer of meaning, whether that be social, political, romantic, etc. – something that allows the work to be more than just a pretty picture. We also have a real attraction to works that show the artist's hand and the labor involved in making the work. That's why we love Ewan Gibbs, Richard Forster, and Brice Marden, to name just a few, where you can clearly see the hours and hours of effort that went into making the final work.

AC: Was there a point when you began collecting with a public audience in mind? Do you still feel like you are adding to the collection you live with or do you feel like you are, in a sense, curating for future exhibitions like "A Secret Affair"?

GF: At one point, I fell in love with a work that was clearly too big to ever be able to live with. It was a giant table and chair sculpture by Robert Therrien. When I decided to buy that work, it was clear that it was for public exhibition – not any personal space I would ever live in. With a few exceptions like this, we still buy almost everything with the hopes of living with it either in our home or in my office. We always prefer to buy things and take them home to live with right away whenever possible.

AC: Any favorites in this show?

GF: There are so many. We love them all. Louis did an amazing job curating the show, and the way the works speak to each other is very much in keeping with how we live with these works when they are installed in New York. The interplay between works is often as exciting as how the works present themselves on their own.

AC: The idea of living with contemporary art seems very important to you. It's hard to imagine having breakfast with Louise Bourgeois' sculptures or working with Marc Quinn's Sphinx within view of your office. What's that like?

GF: Being surrounded by great art is definitely life-affirming. It also forces your brain to constantly think about things you may not otherwise be prodded to think about. This can be very valuable in a work environment where thinking creatively is something you are aspiring to. Art can also create unique environments that change the "atmosphere" and lead to significant emotional, even spiritual, effects on you. Before we had our daughter, we had a room in our house – now her bedroom – in which we installed nearly 30 works by one of our favorite artists, Jim Hodges. Shrine isn't the right word, but it was almost like a Zen temple. We had couches in there, and I would go sit on a couch and look around and get into a really lovely mental place. Even just being in there and reading the newspaper became a special experience. We miss that room, but having a nursery with a baby in it is even more special.

AC: You've been described in business journals as an extraordinarily talented investor. Your and Amanda's philanthropy has also been well reported. How would you describe your motivations for collecting? Do you also see these purchases as an investment?

GF: I have never looked at collecting as investing. They are two very separate and distinct parts of my life and brain. We never sell anything, so while it is always nice to have things appreciate in value, it isn't something we really focus on. Some of the works that have not appreciated in a financial sense are still works we love as much as the ones that have gone up significantly.

AC: Have you collected work from any Texas artists? Are there any on your radar?

GF: We love the work of Richard Patterson, who is British but has lived in Dallas for a long time. Austin-based artist Terri Thomas is also someone whose work is in our collection. Many of the artists we collect show in Austin at Lora Reynolds Gallery. Noriko Ambe, Conrad Bakker, Ewan Gibbs, Tom Molloy, Frank Selby, and Jim Torok all show with Lora, and we have significant holdings of works by all of them.

AC: You and Amanda have a reputation for getting to know the artists whose work you purchase, educating yourselves well beyond what many would expect, visiting studios and spending time with the artists socially outside the usual functions. From all that exposure, it seems you'd have a good idea of what makes a successful artist. So any advice for emerging artists?

GF: We find ourselves spending time with artists because we like them as people and they often think about things in different ways than many of the people we normally spend time with. As I like to joke, it's much more fun having dinner with a group of artists than a group of investment bankers. We don't really get involved in their creative process, however, so I don't really have a perspective on why some are able to achieve that special alchemy to make a great work of art and some aren't. The only advice I have for anyone pursuing a challenging path is to stay the course and just keep working and producing as much as you can. Interacting with the local museums and galleries is also always a good idea.

AC: What's next on your art calendar?

GF: At the Chicago art fair [Expo Chicago], FLAG will be presenting an exhibition curated by basketball legend Shaquille O'Neal. This is the second time we have worked with Shaquille as curator. Our show in the fall at FLAG is called "Disturbing Innocence" and will be curated by artist Eric Fischl. We are also working with Louis Grachos to bring his incredible show at the Contemporary Austin to New York. We never expected to have the show travel, but it has been received so enthusiastically we decided to bring it here. We are confident it will be as popular in New York as it has been in Austin.

"A Secret Affair: Selections From the Fuhrman Family Collection" is in its last few weeks of exhibition at the Contemporary Austin, 700 Congress. For more information, visit www.thecontemporaryaustin.org.