This Sixties satire of big business may be showing its age, but Archangel's production gives it some professional pizazz 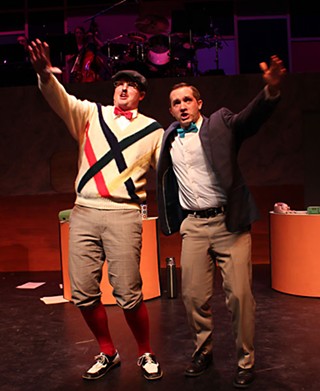 
With the Archangel Community Theatre production of Frank Loesser's Pulitzer-winning musical, the dramatic experience begins the moment you leave your driveway. As your destination's surrounded by some of the most breathtaking vistas the Texas Hill Country has to offer, now's the time to suggest a night out to that friend with a convertible Bugatti ... or Miata. With the show's evening curtain time of 7:30pm, you'll be en route during what photographers affectionately call the "golden hour."

The venue is part of St. Michael's Catholic Academy, and Archangel, as its resident company, serves as a talent incubator for young people, who are given the opportunity to work with musical theatre pros from across the region. This probably won't be the place you'll see innovation or edgy material, but if your tastes lean more toward the traditional, St. Michael's certainly has the resources to stage a professional production.

Director Ivan Klousia has set the show – a satirical view of big business sprung from Shepherd Mead's bestselling book of the same name – in the play's original time period of the early Sixties. Indeed, it's difficult to imagine this story taking place at any other time in history, as the women in the office at the World Wide Wicket Company are all secretaries who we're assured are not toys (is that so?), although the men's attitudes suggest otherwise. Still, costume designer Rick Lin decks them out in pleasant sherbet colors, and the effect feels as embalming as watching a rerun of The Bob Newhart Show. In short, we're willing to deal with a little political incorrectness in exchange for a brief return to simpler times.

The large proscenium stage is ample enough to accommodate plenty of performers onstage at once – 21 during an amusingly jittery number during the crisis of running out of coffee, and nearly 30 in the finale. By far the most impressive musical numbers are "Grand Old Ivy" and (oh, the irony!) "Brotherhood of Man." The latter is a baritone powerhouse and the former really showcases the comedic flair of Scott Shipman as J.B. Biggley, the boss whose ladder-climbing employee, J. Pierrepont Finch (Andrew Cannata), is determined to fake it 'til he makes it.

The students at St. Michael's are lucky to have access to a sound system with this level of quality, and the Gloria Delgado Performing Arts Theatre seats nearly 400 people, so I can see the case for using microphones. Still, there's no getting around the fact that amplified sound is in direct conflict with the audience's ability to suspend disbelief – more so when we can see the mics. "What's the opposite of a romantic? A businessman." Romantics might find the "big sound, little warmth" formula here to be a little too strictly business.

READ MORE
More How to Succeed in Business Without Really Trying