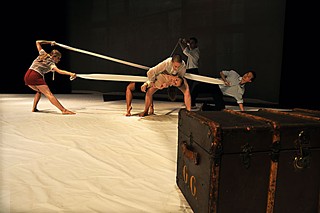 When Ellen Bartel travels to Edinburgh, Scotland, to perform during the Edinburgh Festival Fringe, she'll do so as a Creative Ambassador for the city of Austin. One duty of an Ambassador is to present a gift from the city of Austin, a stone sculpture of a star adorned with record albums, to a cultural leader in Edinburgh. However, a cultural leader with a free hour was difficult to find during the hectic days leading up to the immense festival, which will host over 3,000 (official) performance works and exhibitions – about 1,000 more than the number of (official) bands who played South by Southwest this year. Finally, the day before Bartel's flight, Austin found her a contact, the artistic director of a Scottish organization called Dance Base.

Besides the sculpture, Bartel will take dancer Amy Myers, a member of Ellen Bartel Dance Collective, to perform a duet on a mixed showcase produced by an organization called Dance-Forms. Kaysie Seitz* Brown, a member of the dance faculty at Texas State University, will perform a solo, developed in collaboration with her colleague Ana Baer Carrillo, on the same program. A third Austin group, ARCOS Dance Company, which relocated from Santa Fe late last year, is taking its full-length show The Warriors: A Love Story, which won acclaim for its premiere run in 2013.

The creators of these three works seem to represent – at the risk of oversimplification – three areas that converge in the Austin arts landscape. Bartel is a watchful, old-guard Austinite whose work here dates back to the Slacker era. She was fringe when Austin itself was fringe and remains, die-hard, on the fringe. Bartel's duet with Myers, titled "In the World of Things and Stuff," begins with side-by-side headstands, their sneakers in the air and their brightly patterned skirts falling down over their tanned bodies and cropped haircuts. Their music is being composed by Bartel's longtime collaborator and fellow old-guarder Adam Sultan, who won't reveal it to her until a couple of days before the trip.

Brown and Carrillo, along with Richard Hall, from whom they commissioned a score, represent artists in the academy: faculty and students at Texas State, the University of Texas, and the smaller schools, too. In their piece for Edinburgh, "Capricious Aplomb," the process is as important as the result. Carrillo's video projection includes carefully assembled footage of structures and figures, but audiences will see only glimpses and abstractions, as the footage is projected not on a screen but on Brown's body, draped in white, as her cool, reaching poses sustain and then break into the angles.

ARCOS, directed by Erica Gionfriddo and Curtis Uhlemann, is, perhaps, representative of Austin's new guard, which in many ways isn't so different from the old. It wasn't so much a dance scene but a general creative vibe and quality of life that lured them to Austin. But the fresh tech scene, too, was attractive, as their work aims to innovate with video and sound. The Warriors: A Love Story is based on the World War II convergence of the grandparents of the company's multimedia director, Eliot Gray Fisher. ARCOS has revised and integrated the work for the Fringe, both to make it tourable – the cast was reduced from 10 to seven – and to make the narrative more open and abstract, and thus more accessible for audiences' own connections.

Thanks to a grant from the Rea Charitable Trust, ARCOS will reprise The Warriors in Austin sometime during the 2014-15 season. Brown, too, has plans to perform her solo in her department's next alumni concert. (Bartel doesn't currently have plans to resurrect her duet, though if she's asked ....) Each artist hopes to bring home new ideas, so influences on future iterations of these works are not out of the question. And it's likely that each will leave something of Austin – maybe less concrete than that sculpture, but an influence just the same – in Edinburgh.