Exhibits at the Bullock, Briscoe, and LBJ explore our recall of the Sixties 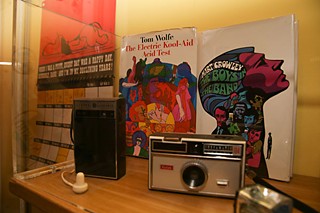 Close your eyes and say it out loud: "The Sixties."

It conjures a Peter Maxxed mod podge of peaceniks, beatniks, moptops in boots, mad men in suits, the black power fist, and Jackie doing the Twist, n'est­-ce pas? Few American decades are as imbued with meaning – some collective, much subjective – sparked by music, memory, word, and image as that tie­-dyed, skinny-tied, fuzzed-out, spy-­themed era.

In the sort of coincidence that some hippies might call kismet, three local institutions are currently flashing back to that decade: the Bullock Texas State History Museum with "The 1968 Exhibit" and "When Austin Got Weird," the LBJ Library and Museum with "Sixty From the '60s," and the Dolph Briscoe Center for American History with "The Power of His Camera: Spider Martin and the Civil Rights Movement." Any of them can stand on its own, but when taken together, they offer a strange and insightful brew.

The LBJ exhibit honors 60 influencers across political, civic, and entertainment arenas. Starting with 1967's Glassboro Summit, where LBJ and Soviet Premier Alexei Kosygin explored options for peace in Vietnam, two empty chairs convey the casual proto-glasnost between the leaders, as well as the eerie discomfit of a world scarred by iron curtains and cold wars.

LBJ launches the queue, of course (it's his library, after all), with JFK across the way. The path of personalities mirrors the era's hard realities: It's 40 feet before any person of color is featured (MLK, Malcolm X, Thurgood Marshall) and another 30 before the first woman (Betty Friedan). Objects related to the subjects dot the floorspace: a life-sized Telstar model, Muhammed Ali's robe, Buzz Aldrin's Snoopy Cap (NASA communication headpiece resembling Snoopy's World War I aviator helmet), a model of Bucky Fuller's Triton City intended for Baltimore Harbor, and a playable retrofitted jukebox (built into the shell of a 1978 Rock-Ola Sybaris that looks very "Sixties").

Just across the plaza from the LBJ, the Briscoe Center focuses images shot during that time by James "Spider" Martin, a self-taught photographer for The Birmingham News.

Then the paper's youngest photographer, and usually relegated to football games and society soirees, Martin was assigned to cover the shooting of a young black deacon – the newsworthiness of which his editors dismissed. The murder spurred the Southern Christian Leadership Conference, led by Martin Luther King Jr., to organize the world-changing march from Selma to Montgomery, Ala. "Spider" was on the scene March 7 as 600 marchers crossed the Edmund Pettus Bridge into the history books. From inside the crowd, he captured the entire showdown between peaceful marchers and state troopers: an arm raised high, holding a nightstick, emerging from clouds of gas, seconds before landing a brutal blow; a trooper standing over an older black woman he's rendered unconscious; a steadfast Andrew Young locked in prayer circle; and MLK addressing the throng of 25,000 on the final, successful march to Montgomery. The photos exploded across the planet, picked up by Look, Life, Der Spiegel, Paris Match, and Time magazines, among others, telling the story that turned the tide of public opinion regarding American civil rights.

The details are fascinating. The troopers' gear, for example – baton, construction helmet, and utility belt loaded with tear gas cans – looks homespun, even rinky-dink by today's standards, but horrifically menacing in context. Behind the violence, the calm of a malt shop stands as all-American backdrop.

A 15-minute walk from the LBJ is the Bullock, hosting the "1968 Exhibit," a magical history tour devoted to the year that's earned as many adjectives (turbulent! pivotal! violent!) as the entire decade. Curated by the Minnesota History Center, this is its seventh stop since its October 2011 launch.

The jarring dichotomy of a life-sized Huey helicopter parked in a middle-class living room makes its point: Vietnam was the first American war brought into our homes every night. Despite the looming chopper blades, the room is inviting, almost cheery, an affectionate re-creation decked in Paul McCobb-y takes on Danish modern, accents in harvest gold and avocado, and comfort triggers set to stun: a Head of the Class board game, a set of World Books (the forgotten Internet of days gone by), a letter from a son serving overseas, Walter Cronkite on the tube, and owls everywhere. Inside the Huey, servicemembers give their testimony, and across the way a flag-draped coffin lies in state.

Tasty op arty displays designed to delight – with sides of gut punch – lie at every turn. The story of '68 is organized chronologically by month, with rooms and tableaux employing effective scrims and lighting to highlight the year's events: the assassinations of MLK and RFK, the riots at the Democratic National Convention in Chicago, the conservative re-emergence, and the Black Panther and Native American movements.

Finding a favorite artifact among the 150-plus on display is easy. (Ain't nothing like the real thing, baby, but where originals weren't to be had, thoughtful and fairly accurate re-creations suffice – vintage Lone Star labels, for example.) For me, the nostalgia triggers were the plastic Star Trek tracer guns that shoot colored "jet discs" and the astronaut Snoopy doll (wearing, in fact, a Snoopy Cap). That year, even the superficial made statements. What can I say? I was a kid in '68.

And as I recall, we all clung to as much pop culture and silliness as we could, as it was easier to digest the bomb threats at school and horrors on TV to the tune of "Yummy Yummy Yummy." Bright bold stacks of Hellerware dishes, patchwork jeans, and giant images of Twiggy and Barbarella mercifully contextualize and buoy the events of one helluva year – love it or leave it.

On the third floor, Texas makes a Sixties stand in the locally curated "When Austin Got Weird," displaying psyched-out posters for shows by Janis Joplin, Fats Domino, Sir Doug, and assorted other artists that played the capital city back when cowboys were cosmic and musicians could afford to live here.

Back on the first floor, the last room of the "1968 Exhibit" returns visitors to that avocado living room with Walter Cronkite's reassuring tones setting the scene. It's December, and the holidays are upon 1968, with paper-craft Nativities and homemade ornaments filling the case. A difficult year has passed, evidenced by a velvet tapestry of MLK, JFK, and RFK, and an American flag in a trifold case atop the living room hutch. The war has come home. The other elephant in the room is a life-sized Apollo capsule, marking the U.S. space program's first orbit of the moon, and thus our first full view of the Earth from afar.

Try to resist, like the draft, too insular a read of this conflux of Sixties in Austin. After all, if the decade inspired one thing, it was us to "Journey to the Center of [Our] Mind." Then again, that same era insisted we "Take a Giant Step" outside of it.

"The Power of His Camera: Spider Martin and the Civil Rights Movement" shows through Dec. 19 at the Briscoe Center for American History, 2300 Red River.

Performing/Guzzling
We know that Kim Gordon is expert at being watched, but this collection of her artwork turns the gaze around