The performance of this ancient Greek comedy is inconsistent, but the experience around it makes it worth a visit 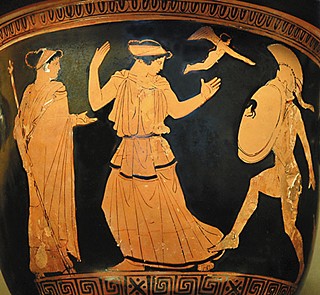 
Producers in the theatre have always recognized the importance of creating an experience for their patrons that extends beyond the performance itself.

Lysistrata at the Curtain Theatre provides one such experience. Though the Baron's Men depart from their typical Elizabethan fare with this, "the only Greek comedy to be played on the Curtain stage," according to director Lindsay M. Palinsky's program note, they still evoke the atmosphere of theatregoing in Shakespeare's day at this magical venue. Before even reaching the entrance, one is greeted by costumed personnel who sell tickets, concessions, and sundry accoutrements from assorted carts that seem to pay homage to Disney's Fantasyland (photo opportunities are plentiful). A tolling bell signals the start of the performance and, at intermission, warns patrons of the impending start of the second act. The scene feels like a cross between a mini-Renaissance faire and an evening on the lake, which can be a pretty enticing mixture for Austin theatregoers.

Inside the theatre, set designers/constructors Capital of Texas Finish Carpentry have done a beautiful job making subtle changes to the Curtain's Renaissance bones, melding historical styles in a way that one seems to enhance the other as a frame for the Aristophanes to come. As for the play itself, it's clear that many of its aspects have been thoroughly researched from a dramaturgical standpoint, and kudos are due to both director and company for making the story and language clear. This isn't a production where one needs to think too hard about the goings-on, and it's certainly very funny material; if you aren't familiar with the story, you're likely to recognize its timeless narrative. (Though you might consider leaving the young kids at home, or you could have a lot of explaining to do about certain "mature" prop/ costume pieces.)

That said, the performance could use some tightening, particularly in the chorus sections for which the Greek playwrights were so well known. Some cast members appear less familiar than others with their lines, and some are far more committed to specific choices. On the whole, the staging is quite solid, with many interesting pictures throughout. On the night I attended, the performance of the second act was considerably superior to the first, aided by many additional sight gags, shticky comedy, and fun stage combat.

Though the production is somewhat inconsistent in terms of acting, the experiential quality of the evening is reason to give Lysistrata a try. And thanks to the clarity with which the text is presented, you won't have to worry that "it's all Greek to me." 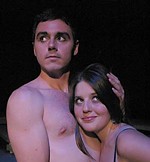 Lysistrata
This ancient satire is still timely, but new material here gets in the play's way 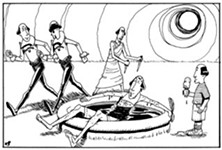 If It's Summer, It Must Be Shakespeare
In this season of the bard, the men are men and the women are, too