'Mariah Dekkenga and Josef Bull: We have never been modern' 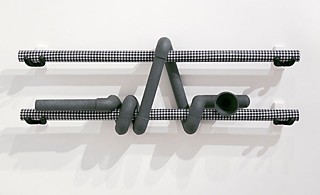 
Mariah Dekkenga and Josef Bull's works at MASS Gallery concern themselves with separations: how we separate ourselves from other cultures and even our own cultural past. The title, "We have never been modern," taken from Bruno Latour's book of the same name, argues against the modernist notion that we are different (or better) than the premodern. Paradoxically, this unifying declaration separates our current time from our own recent past (modernism). It's a paradox as tangled as Latour's book, but represented as art rather than text, these paradoxes somehow make sense – or, at the least, ring true despite their contradictions.

Josef Bull's This video is about the answer is exemplary of how the exhibition addresses multiple times and cultures all at once. On one layer, the work is clearly part of our own time: a compilation of YouTube videos and audio played on a tablet screen – but the video seems to come from decades earlier. The screen shows self-proclaimed business guru Jim Francis walking across hot coals with his students, tapping into primitive impulses to find some personal quality that can produce profit. There's something about a pack of overweight folks in business attire summoning up a strange corporate witchery that's quite comical. This is compounded by the contradictory audio taken from another YouTube clip that preaches the cliche of being unique and valuing yourself as the key to success, rather than falling in line (say, to walk over hot coals). Taken together, they're like looking back through the embarrassing family albums of corporate America and the self-help balloon of the last 30 years.

The video mixes the premodern (fire-walking) with the modern (Eighties-style business) and the postmodern (YouTube, tablet, retrospective mockery). It's the most skeptical of the works here, poking fun at these temporal separations and those who try to cross them. The other works are more positive in this regard: Dekkenga's painting and digital studies of gingham cloth, a product that spans vast swaths of history and countless cultures, or Bull's Dr. Seuss-esque didgeridoos made of PVC pipe. For those who missed the opening, these could also be read in a cynical light, but on that evening the most elaborate didgeridoo was brought to life by Austin-based musician Steve Daniel. The continuous tone belied the cheap plastic and evoked the same response in its listeners that the premodern tribal version would have. These deep vibrations are further depicted through Dekkenga's deconstructed gingham paintings, and together with Bull's work, they weave an intricate web of times and cultures not-so-neatly categorized by terms like separated or connected, modern or not modern.