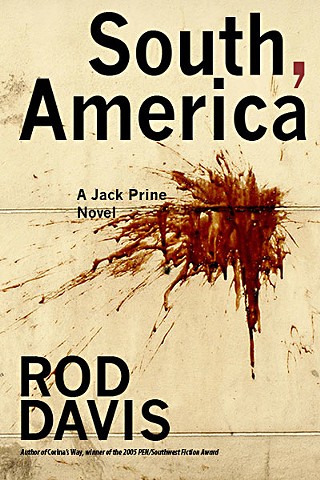 
Rod Davis' new thriller is labeled "A Jack Prine Novel," and introduces its world-weary hero, savvy and muscular enough to carry on his back what promises to be an engaging Southern noir series. Prine, of Texas roots, is a veteran of Army intelligence, having since become a semi-disgraced reporter, writer, and occasionally freelance PI. Holed up in New Orleans, on his walk to Sunday morning coffee he finds a freshly murdered body – and is soon drawn into a plot involving blackmail, art theft, the Dixie mafia, and inevitably the whole contradictory history of incestuous Southern racial relations.

Case in point, a grotesque villain is also an accomplished painter of watercolors "political in a way not to be expected" from such a source. "But then that was the South in America, wasn't [it]? Hardly anything made sense straight on." Like the coy comma in the book's title that redetermines its meaning, the novel proceeds by indirection and sly tangent, through sudden explosions of violence into meditations on Southern history and its persistent burdens on the present. That burden is embodied in the sister of the victim – the beautiful and suggestively named Elle Meridian – who inevitably draws Prine into her complicated family narrative that incorporates generations of Southern – which is to say, American – racial, religious, and sexual reverberations.

"When the South is in you, you come back, sooner or later," Elle reminds Prine, and the same is true of Southern novelists. Murder plot resolved – with sufficient cathartic bloodshed – there are enough loose ends here to provide Prine, and his author, with a few leads into another mystery, or more. Laissez les mauvais temps rouler.