'Susurrus,' 'Music for Wilderness Lake' at Laguna Gloria offer art for the ears 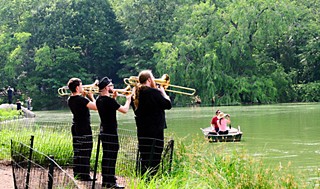 "The isle is full of noises,/ Sounds and sweet airs that give delight and hurt not./ Sometimes a thousand twangling instruments/ Will hum about mine ears, and sometime voices."

Caliban's words describe the aural wonders on the strange island in Shakespeare's The Tempest, but they apply equally well to the enchanted grounds of Laguna Gloria this weekend. Two programs from the Contemporary Austin infuse the lakeside property's natural beauty with sounds that captivate.

The first, Susurrus, is actually a play, though you'll see no stage nor actors. Instead, you'll see lots of nature, following a set path from a love seat inside the Driscoll Villa outside down to the water's edge and along wooded trails, pausing at specific times to sit on a bench and listen on headphones to four narrators weaving a tale of family, love, opera, desire, and, curiously, sparrows. Scots playwright-director David Leddy first developed this walking tour-cum-drama for Glasgow Botanic Gardens, but since 2007 he's adapted it for sites throughout the UK and Europe, Brazil, Chile, Mexico, and a half-dozen spots in the U.S. His script draws heavily from A Midsummer Night's Dream – both the Bard's comedy and Benjamin Britten's opera – and while you won't mistake Laguna Gloria for an "Athenian wood" (or English forest, for that matter), the sheltering trees with their shivering leaves do take on a sort of magical life, and every thing that flits by – butterfly, dragonfly, wasp, even the cottony fluff drifting on the air – seem to belong to Oberon and Titania's fairy court. Leddy's canny threading of the connected narratives, the intimacy of those voices (with their seductive burrs) in your head alone, the ache of loss and memory in their stories, and the blended beauty of richly emotional music and nature create an otherworldly, haunting experience.

The second, Music for Wilderness Lake, brings to town R. Murray Schafer's work for a trombone choir to perform at sunset and sunrise around a body of water. As in last year's Laguna Gloria Sound Series piece Concerto Laguna, a person in a boat figures prominently, but instead of the floating cellist in Travis Weller's composition, the figure in Aldo Valdés Böhm's handcrafted wooden canoe will be conducting the 12 trombonists, half of whom will be on the Laguna Gloria shoreline and half of whom will be dispersed along docks across the water and unable to see one another. Whether you go to hear it at dusk on Friday or dawn on Saturday, give yourself an extra hour and a quarter to experience Susurrus.

Anya Gallaccio: to see if time was there at Laguna Gloria
The artist's giant tree stump carved from limestone is a sign that we love ancient things and are part of nature, too