Penfold's condensed version of Shakespeare's play, played by five actors, brings out the heart of the tragedy 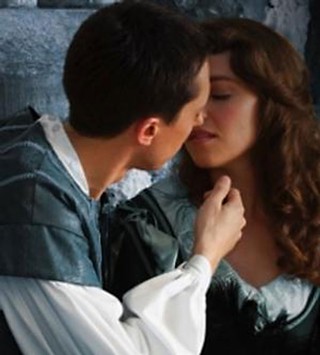 
Shakespeare wrote a tragedy for every season of life. Some speak to the grief of old age, and others point to the errors of our middle years. Romeo and Juliet is about what comes from following the passions of our youth.

Penfold Theatre Company has made its mark producing small-cast plays with great performers and solid direction. Its Romeo and Juliet is no different. The play's large cast of characters has been pared down to be played by only five actors. Ryan Crowder (who also plays Romeo) has condensed the script into two well-paced hours that illuminate all the key points of a plot that has many moving parts. The production captures the brashness of these characters, and, in turn, it points to the thrill and the danger of acting from passion rather than wisdom.

Joseph Garlock's Mercutio is one of the most satisfying in memory. The character may be the first of many to die in the play, but more than any other he shows how small, harmless impulses born of dissatisfaction can flare into tragedies. In fact, what's striking about Penfold's production is how scenes that are often overlooked in other stagings stick in the mind later: Romeo carousing with his buddies or the Nurse interrupting their jockeying to deliver a message. At the end of the day, Romeo and his friends are just dudes hanging out – except heavily armed and caught in the middle of a feud between two very rich and dangerous patriarchs.

Julia Lorenz-Olson's Juliet is a tricky point. For a modern audience that, one hopes, takes satisfaction from seeing strong women characters who know their own minds, it's arguably natural to seek out a Juliet who's more forceful than demure. An appealing performer, Lorenz-Olson plays these choices well. Yet some tiny bit of credibility lacks in the romance. Her impulsiveness is clear, but Juliet here is more woman than girl. Could someone so able to stand her ground really show the tragedy of not knowing her own mind fully? In a play of untempered passions from all quarters, there's a lingering sense that this Juliet, on some level, ought to have known better.

Kari Taylor deserves credit for designing appealing costumes that allow the actors to change characters with impressive speed. Likewise, director Steven Pounders provides direction that is nimble and inventive, given the challenges of producing a show at the Round Rock Amphitheater. A few scenes struggle under the strictures of the small cast, as actors have no option but to change onstage during important moments. Otherwise, the pacing here is impressive and engaging.

Each summer, Penfold provides a family-friendly show for its outdoor slot. This Romeo and Juliet has great actors and clear direction, making it the kind of show that will entertain children and engage audiences after more complex fare. It brings out the heart of the tragedy in a way that is ultimately satisfying.