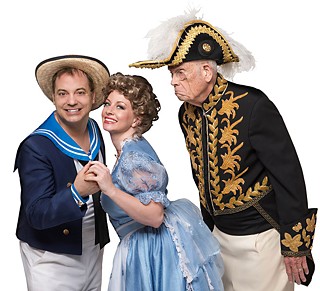 
H.M.S. Pinafore is one of the most iconic – and oft-performed – works in the Gilbert & Sullivan canon. "Nobody doesn't like H.M.S. Pinafore," asserts Libby Weed, president of the Gilbert & Sullivan Society of Austin, in her playbill notes. Although this particular reviewer may not find Pinafore to be the wittiest member of the G&S oeuvre, it's not hard to rationalize the mass appeal of this, one of the duo's early collaborations. (The original production opened in 1878.)

After all, Pinafore sports all the necessary ingredients for the most riotous of romps: the star-crossed pair of lovers, played and sung wonderfully here by G&S Society alums Carol Brown and Holton Johnson; the cantankerous Rt. Hon. Sir Joseph Porter, KCB, impressively portrayed by Society mainstay Russell Gregory; and the hilariously villainous Dick Deadeye, with whom David Fontenot makes a fine showing, as does Gil Zilkha as Captain Corcoran. Ann Marie Gordon's whimsical set establishes a fantastic tone for the heaps of hijinks, framed by the beautiful Worley Barton Theater on the Brentwood Christian School campus. The costumes from Canadian supplier Harlequin, coordinated by Pam Fowler, are magnificent and vibrantly colorful.

It would be difficult not to have fun as an audience member at this production. That said, the ensemble vocals are not quite as strong as previous G&S Society outings; nor is the orchestra quite as polished. Speaking as a musical director myself, I wager that this is likely due to it being the show's opening weekend. Given the quality of previous Society productions under the excellent musical direction of Jeffrey Jones-Ragona, I predict that the musical profile of this Pinafore will solidify as the run progresses and result in the company's typically high-quality product, both onstage and in the pit. The choreography is still a little shaky across the ensemble, but I imagine this will also remedy itself as cast members continue to gel with one another.

As is typical, stage director and choreographer Ralph MacPhail Jr. has provided the audience with a rich dramaturgical glimpse into the world of Pinafore through his intricate playbill notes and, indeed, the show itself. He shares, "We ... hope to provide happy memories of a pleasant cruise for you passengers who sail the ocean blue with us into that enchanted land Gilbert called 'Topsyturvydom.'" It's a goal happily met by the production.