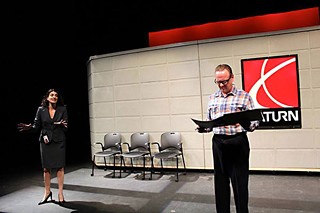 
Hell. Yes. Give me a story about suburbia, and I'll show you some blood on the linoleum. Three cheers for Theatre En Bloc and director Jenny Lavery for staging Bethany, by my new hero Laura Marks. While not a flawless script, it has so much going for it thematically that I'm more than willing to suspend my disbelief. Among its targets are some personal favorites: bedeviled social services systems, banks, the public school system, and the "drywall junkyards" left uninhabited in the wake of the subprime mortgage crisis. Yet perhaps the biggest bogeyman of all is something even more powerful: the fireball of adversity that comes hurtling at warp speed toward one of our greatest unsung heroes, the single mother.

NY Newsday called one production of this show "tough, disturbing, and delightfully unsentimental," and boy, does this Austin cast deliver that. Rick Smith knocks it out of the park as the deeply creepy Charlie, a motivational speaker who embodies the kind of insidious, pervasive harassment that young women often endure, even in their mission to make an honest buck. He's brilliantly cast and utterly repulsive as he assures us that, among other things, God wants us to be rich. His prey is the sadly culpable Crystal (Lara Wright), a reluctant squatter sharing temporary shelter with an unwashed stranger named Gary (Derek Kolluri). The three of them form a deluded, impoverished trinity of American tragedy.

The two settings, a suburban kitchen and the interior of a Saturn car dealership, compete with each other in an offensive quest for inoffensiveness. With an incessant Muzak soundtrack, as our anti-heroine moves from one chemically sterilized environment to another, you can almost smell the noxious protective coating on the particleboard cabinetry. Scenic designer WT Bryant makes both spaces as fantastically joyless as they should be.

A graduate of Julliard's playwriting program, Marks knows full well how to build a play. Good ones have a main character with what Arthur Miller calls an "unstoppable emotion" – a need that must be satisfied – and significant obstacles. With these building blocks in mind, it's a wonder more people don't put a single mother at the center of their dramas; the ultimate martyr, frequently plagued by desperation and determined to survive against all odds, this is one archetype absolutely begging for immortality through art. Marks is wise to take note, although her Crystal is no saint.

Marks takes a cue from screenwriter Alan Ball with Bethany, which clearly belongs to the American Beauty school of social criticism. As the element of surprise greatly enhances the experience, I've intentionally avoided giving the reader a play-by-play of the action. Perhaps even a well-deserved nod to fight choreographer Joseph Garlock is TMI. Shit gets real in this requiem for real estate.