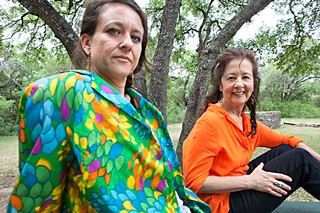 When choreographer Heloise Gold says that she's collaborating on a piece with actor Jason Phelps, naturally, you want to know what the piece is like.

"We're singing a lot of mock opera. I'm going so far as making myself learn a Puccini aria ..."

Gold, raised eyebrows framing her small, open face, pauses to look at Julie Nathan­ielsz, her colleague and performance co-producer, who is laughing into her fist. "This is the first I've heard of this!" Nath­anielsz explains, and Gold continues, not laughing, but not terribly serious, either. "It's singing opera with sort of the angst of a soul singer and the raunchiness of punk."

The piece, titled "The Sound That Shook the World," is one of four collaborative dance works that, along with one experimental film, comprise Gold and Nathan­ielsz's new Gold Show|Rose Show, opening this weekend. What's striking about this lineup, coming from these particular dance artists, is the pervasiveness of music. This dancing-to-music business isn't Gold's way: She's rarely danced to music since she was a teenage ballet student, over 40 years ago. But "Hips and Jet Streams," a dance by Gold and Elaine Dove, grew out of an instinctual response to Middle Eastern music. They considered crafting around it – playing with the volume, making it audible only to the performers – but in the end they succumbed to their instinct. They're just going to play the darn CD and dance.

Music has rarely, if ever, been an assumption for Nathanielsz, either. In her solo "Yo, Genesis," performed in the Gold Show|Rose Show last year, bits of recordings of popular songs occasionally entered the soundscape, which otherwise consisted of what we might call "silence" but is really the soundscape made by the body as it moves, friction, and the ambient sounds of the theatre. Still, this silence was the equivalent of white space, against which the song bits were extra-visible, tangible. This year, owing to Nathanielsz's new interest in rhythm and cadence, a new version of "Yo, Genesis" has a score; she met the composer, Maija Hynninen, during an artists' residency in rural Finland last fall. And a new collaboration with Margery Segal springs from the workhorse backup dancer – think Tina Turner's Ikettes – but also the corps de ballet, framing and making visible the music behind the star.

With "The Backup Dancer: Bits and Acts From the Night Train," Nathanielsz resurrects Segal, once a major player in Austin dance (who is also married to Phelps), after a decadelong performing hiatus. Nathanielsz quips that she collaborates with artists like Segal out of self-interest, but Gold adds that collaboration – true collaboration, synthesis – occurs only when the artists are true equals in the process. Case in point: For "The Sound That Shook the World," Phelps and Gold stepped into the studio together, sans preconceived ideas, and engaged in theatrical hijinks to coax out a mutual curiosity – which just happened to be channeling, probably in the most touching and surprising of ways, one of the most highly trained and difficult art forms on the planet.

Gold is no stranger to opera houses: As a child, she studied ballet and, in 1962, beat out hundreds of New York City 10-year-olds to land children's roles with the Bolshoi Ballet, on tour at the Metropolitan Opera House. But at 20, she walked away from ballet and didn't look back. She joined the Deborah Hay Dance Company in 1980 and soon after experienced a dream that told her to make bird dances, resulting in a lifetime of avian avatars. Though her works flirt with absurdity, the contexts she crafts for them – for Watching From the She Palace (1985), she wrote an entire novella – make homebodies of eccentricities. Outside of dance, Gold teaches tai chi and has written a manual for Deep Listening, a composer-founded method of heightening listening and awareness by availing the entire body.

Nathanielsz attended a Deep Listening workshop led by Gold in 2006, and they've worked together intermittently since. Having shunned codified dance training at an early age, Nathanielsz is abstract yet deeply cerebral when discussing her work, which has taken place in Austin for 20 years, though she's originally from the UK. She speaks little of her MFA years at the University of Texas, preferring instead to discuss concepts that have fascinated her of late: the "axis" as an end of potential, the body's depth of evolutionary knowledge as a "wild, intelligent place," the division of time into rhythm. She teaches experiential anatomy, improvisation, and Skinner Releasing, in which imagery helps practitioners achieve states that feel like "melting into the floor."

Their values compatible, their interests complementary, Gold and Nathanielsz have worked in the same spheres, collaborating with the same people, for a decade. Last year, fatigued of the costs and mundane responsibilities of self-producing, they decided to go halvsies. Each half of Gold Show|Rose Show 2013 was self-sufficient – really, they were two shows spliced at intermission – but also a rich context for the other. Gold Show was all Gold: Buttressed by two meditative films, "Dream Birds" was rooted in her body of work, and in "Resonance," a duet with percussionist Nick Hennies, sound was made visible through the intelligent vessel of her body. But the color palette evoked midnight, with costumes and lighting in pewter and blues. In Rose Show, though, "Yo, Genesis" was costumed and lit in the hue of skin flushed with warmth, of appearing and fading, of the subtleties of life evoked by the perplexing movements of "Yo, Genesis" and "What Is Common" (a trio for Nathan­ielsz, Dove, and Gold). Rich as each half was, the whole concert was only around two hours long; judging from my memory and the Austin Critics Table nominations, it ranks among the year's most memorable dance concerts.

For this year, Gold and Nathanielsz had planned to expand their co-production into separate concerts on different weekends. But when their venue fell through eight weeks before opening – construction delays rendered null the agreement they'd signed, back in October, to perform at the new First Street Studio – they knew that finding available space for two weekends would be impossible. Scrambling, they scaled their plans back down to four performances of a shared concert and made a dozen phone calls. Thanks to a landlord who actually answered the phone and his tenant, a generous tango teacher, the partially vacant Galaxy Studio, near Oltorf, is theirs for the week. (Negotiations in the dance world being what they are, Gold had an impromptu tango lesson before the deal was sealed.)

And that's how their co-produced series ended up another co-produced show – the title's the same, but they've scrapped the half-and-half structure for a more integrated program – and how Gold and Nathanielsz came to discuss, outside a South Austin cafe, their values and inquiries, individual and shared. One of the shared ones, it turns out, is the practice of being present. ... Wait, presence is something that is practiced?

Heloise Gold: For me it is. One of the reasons I love to perform is that there's a heightened state of awareness. It's like this sort of alert receptivity and sense of everything all at once, deeply engaged in and through the body, with the space, connecting to the other performers and to the audience – there's so much to pay attention to.

Austin Chronicle: Is that something that comes out of tai chi for you?

Gold: Yes, and just sort of a generic movement meditation awareness. I'm so influenced by the Deep Listening work by Pauline Oliveros – the body as a vehicle for listening, truly. [pause] Wakefulness.

AC: [to Nathanielsz] How does that compare to your daily practice?

Julie Nathanielsz: [long pause] I find this question a little mind-boggling. So I guess my question about presence is, where is the choreography occurring? As dancers, we include everything. We bring everything with us. But we cannot focus on all the layers all the time. Something is in the foreground, most is just running in the background. So yeah, I do have something. It's nothing like Heloise and tai chi. I feel a lot less disciplined. [laughs]

Gold: Well, I teach it, so I have to keep returning to it.

Nathanielsz: Something about presence that is problematic as a term is the root "present." It doesn't just include the present; it includes the past and the future.

Gold: For me, when I use the word "presence," it's like right now, I am bringing all of my experience from the past. And wherever I'm going next into at least some kind of open awareness of that.

Nathanielsz: I think limiting the question is a good idea. When performing, it's sort of a question of what's included and what's not. There might be a practice of including more, or including more layers, but I may not be calling upon all those layers in a piece. But the history is there.

Nathanielsz: So this is where this kind of paradox of the term is. All the work is in the performance. And it's a layer of the choreography.

Gold: And the commitment to the choreography.

Nathanielsz: And the practice is separate from the performance, but we do the practice and [gain] the knowledge.

In conversation, Nathanielsz is concerned with avoiding preciosity, and Gold is concerned about preciseness. This isn't my first conversation with Nathanielsz, and still I understand little about her daily practice. Perhaps it's unfair for me to keep asking for a literal answer to such a nebulous, holistic pursuit. Perhaps my question should have been: If you train yourself to have a heightened awareness, when are you not practicing presence? And anyway, as dancer-turned-writer Toni Bentley pointed out, one cannot be sure one is a dancer at all unless one is actually dancing – you can't talk into dancing. I suppose that goes for presence.

The limitations of spoken language aside, there are arresting differences in the artists' embodiments of presence. Gold straightens her spine, broadens her back, holds her arms away from her body like a golden idol. She twists her torso from side to side, showing that the environment around her is included; presence encompasses all the dimensions. Nathanielsz, on the other hand, closes her eyes, goes inward. She taps her fingers on the table as if searching for the right key to press. But both allow silence – or, more accurately, the background sounds of birdsong, traffic, the ripple of other conversations – to flow between their phrases. Days after the conversation, I recall the sound of a ceramic cup clinking to its saucer. Somehow, this memory of a sound – this nothing – seems to concretize what Gold and Nathanielsz have probably been trying to explain all along: Being present, listening to silence, is a way to get closer to the music that's all around. 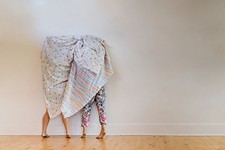