The 2014 class of the Austin Arts Hall of Fame

That there is strength in numbers is common knowledge, but there can also be inspiration in numbers. And resourcefulness. And transformational change. That's the lesson from this year's inductees into the Austin Arts Hall of Fame. In the honor's 13-year history, the Austin Critics Table has traditionally recognized individuals and couples, but for 2014 the informal affiliation of arts writers has selected three groups, entities in which gifted artists have banded together to make work and other contributions to the community, and achieved more collectively than they might have alone. All three have not only made Austin's cultural scene more vibrant, they've also changed the face of that scene and even the way that scene is viewed around the state and across the country. They stand beside the 100-plus artists, educators, patrons, and arts advocates whose pioneering efforts in nurturing visual art, dance, theatre, and classical music in Austin have already earned them a place in the Hall of Fame. The Class of 2014 will be inducted during the Austin Critics Table Awards ceremony on Monday, June 2, 7pm, at Cap City Comedy Club, 8120 Research. Here is an introduction to the latest honorees and why we honor them. 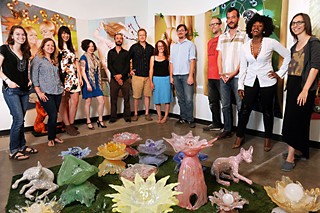 Time was, about the only locals who went east of I-35 to look at art were the ones making it. And that might still be the case were it not for Big Medium. The small organization – initially just three working artists: Shea Little, Jana Swec, and Joseph Phillips – launched the East Austin Studio Tour in 2003, and in just a few years, it became one of the biggest arts events on the city's cultural calendar, with thousands of Austinites trooping across the Eastside to meet artists in galleries, garages, warehouses, kitchens, ... wherever they made their work. The founders had already established a strong creative identity as the award-winning collective Sodalitas, but Big Medium became their vehicle for supporting the visual arts – which they've done on a large scale. Through it, they've helped artists have places to work; Big Medium's renovated warehouse on Bolm Road became a model for making an industrial site into an affordable multiple-artist studio/exhibition space, and that led to the development of the recent studio/gallery complex Canopy. And through Big Medium, they've helped artists have places to show that work, in the galleries at Bolm Studios and Canopy, and to sell that work, in EAST and its spring sibling, the West Austin Studio Tour. They've supported a host of smaller projects, too – the art publications Cantanker and Pastelegram, the art competition Eyes Got It!, the ART From the Ashes show after the Bastrop fire – but even when an idea has been improbably ambitious – "Hey, why don't we start a biennial juried exhibition of art from all over Texas?" – Big Medium has found a way to make it happen and make it work. Most artists work in paint or clay or stone; these artists work in community – a truly big medium in which their creations have made a huge impact.

Longevity isn't expected among theatre companies started by a pack of friends in their 20s who insist on making every decision collectively, and yet here are the Rude Mechanicals on the cusp of their 20th year together, with the five founders (Kirk Lynn, Madge Darlington, Sarah Richardson, Lana Lesley, and Shawn Sides) still at the helm and still poring over every choice as a team. The intensity of collaboration that causes so many art gangs to flame out so soon has, like a Maccabean miracle, kept the Rudes' light burning longer and more brightly than is natural, as seen in their two dozen company-created plays, including Requiem for Tesla, Lipstick Traces, Get Your War On, I've Never Been So Happy, and The Method Gun. Part of a generation of troupes that lit a fire under local theatre in the Nineties, the Rudes broke rules and bucked convention with shows that were original, funny, and inventively theatrical; but what distinguished them was that shared sensibility underpinning every show: curious, contentious, mischievous, and generous. It earned them scores of awards; national acclaim, with The New York Times' Margo Jefferson declaring the Rudes to be one of three companies in the U.S. making theatre that matters; national and international tours (most recently, Stop Hitting Yourself's six-week run at Lincoln Center); and being named resident theatre company at UT. But they continue to make work in Austin, a city to which they feel deeply tied. (See El Paraiso.) And they give back to the city, making their Eastside warehouse-turned-performance venue, the Off Center, available to other arts groups (often for less than they can afford), co-producing theatre with other companies, and helping teen girls express themselves creatively via their Grrl Action program. Never as rough, unlettered, or theatrically inept as their amateur-thespian namesakes in A Midsummer Night's Dream, the Rudes are like the Bard's creations in this: They're honest laborers who work with their hands, and what they make is crafted with care. 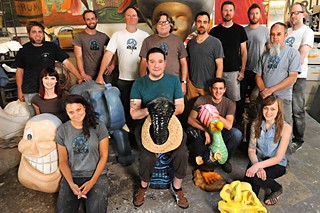 Magic has nothing to do with the success of Blue Genie – the artistmakers inside the 10,000-square-foot warehouse on Springdale are simply among the hardest-working creatives in town – but the art they produce has always been enchanting. From the mystical Mayan courtyard at Casino el Camino to the armadillo-festooned entrance to Threadgill's World Headquarters to the guitar gal atop Fran's Hamburgers to the sapphire-skinned djinn who watches over their workshop and gives the group its name, Blue Genie's work has projected style and personality with the kind of imagination and playfulness that are intrinsic to the Austin spirit. Perhaps that's why so many local businesses rushed to embrace the collective's whimsical three-dimensional signage and large-scale retro murals, and even staid institutions like the Bullock Texas State History Museum and LBJ Library and Museum solicited work from it. As co-founding Genie Dana Younger told the Chronicle when he and fellow original Genies Rory Skagen and Kevin Collins crafted six massive bas-relief panels for the Bullock exterior, "There's a quality to what we produce that's kind of – well, it's specifically Austin, you know." In the 15 years since Blue Genie rose from the ashes of Younger and Collins' Black Mountain Art, the company's evolved into a highly skilled commercial operation able to tackle technically demanding projects on a genuinely monumental scale, all while maintaining its sense of humor and impeccable design. It raised the bar for commercial signage in Austin and in so doing transformed the city's look. Along the way, it's also managed to support local visual artists, through the Blue Genie Art Bazaar, an art sale that's now a holiday tradition; exhibits of artists' work in its space; and community events such as the Blue Genie Danger Derby.