This book by the author of The Hours is a frozen confection of a novel, at once simple and intricate – and gorgeous


Michael Cunningham's The Snow Queen is a frozen confection of a novel, a simple yet intricate domestic drama written from the multiple viewpoints of a tight-knit, nontraditional family. The brief tale seems exhaled all in one frosty breath, so that when the characters' voices occasionally bleed into one another, it's a testimony to the novel's underlying message about intimacy and connection.

With a lighter touch than Cunningham's Pulitzer Prize-winning Virginia Woolf homage The Hours, The Snow Queen introduces Barrett and Tyler Meeks: two brothers, one gay and one straight, whose lifelong intimacy is amplified during the sickness of Tyler's fiancée Beth, the "snow queen" of the title. The book begins with the recently dumped Barrett seeing a mysterious light in the sky over Central Park, and the mystical revelation haunts the book, its significance never quite explained except as a metaphor for the characters' yearning to believe that flickers of self-knowledge and connectedness can change us. For Cunningham, such moments are only decipherable through the Rosetta Stone of literature, which is why the most important characters in his novels always seem to have a thorough knowledge of their resemblance to the characters of Henry James and Edith Wharton.

Literary references aside, however, there's an adolescent moodiness to Cunningham's prose, like Michael Stipe lyrics unwisely copied into a love letter, that gets melty in the harsh light of day. As with a Popsicle, the book is best enjoyed in one sitting, before it starts to drip. Whether pondering divine encounters, limning a young man's beauty, or overusing the word "miniature," the prose hovers a bit too much over its own reflection, but is beautiful enough to get away with it. One hopes that Cunningham will continue to knock out another of these gorgeous little snow globes of humanity every four or five years, and that they will always be as lusciously readable as this one. 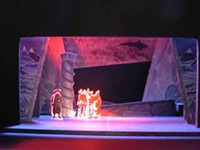 All Aboard for Middle Earth
Before the Film "Lord of the Rings' Sends You to Tolkien Country, Second Youth's Stage Version of "The Hobbit' Can Take You There and Back Again