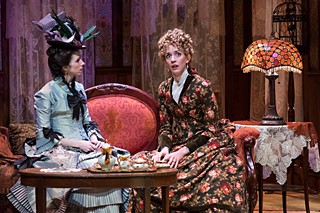 Those ink-stained wretches of the arts beat have made their call. After poring over the hundreds of stage productions, concerts, and exhibitions mounted in town between May 1, 2013, and April 30, 2014, the folks who cover culture for the Austin American-Statesman and Austin Chronicle have agreed on the most outstanding achievements in dance, classical music, visual arts, and theatre in the past year and announced the results. Receiving the most attention on the list was the Zach Theatre production of Sarah Ruhl's In the Next Room, or The Vibrator Play, with eight nominations. Receiving five nods apiece were the Mary Moody Northen Theatre's staging of the Sondheim musical Merrily We Roll Along and the Rude Mechs' premiere of Kirk Lynn's Fixing King John. (Since this author was a member of that show's cast, it may be pertinent to note here that members of the Table refrained from voting on any project in which they or an immediate family member took part.) The full list of nominees for the 2014 Austin Critics Table Awards is available at austinchronicle.com. The most recent inductees into the Austin Arts Hall of Fame were also announced, and all three are arts collectives: Big Medium, Blue Genie Art Industries, and the Rude Mechanicals.

The induction of these local legends into the Hall of Fame will take place during the usual exceedingly informal ceremony on Monday, June 2, 7pm, at Cap City Comedy Club, 8120 Research. As always, the public is welcome, and admission is free.