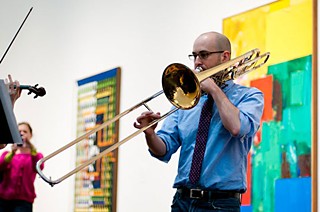 For the past couple of months, Austin has had the opportunity to see minimalism in some of its most exquisite expressions, via the Blanton Museum of Art exhibition "Converging Lines: Eva Hesse and Sol LeWitt." This Sunday, we'll also be able to hear minimalism, thanks to the museum's ongoing SoundSpace series, which brings live performance – mostly music, but also some dance and theatre – into the Blanton galleries, where it plays off of the visual art on display. Steve Parker is the mastermind of the series, which has, in its four years, graced the Blanton with such audacious live events as a concert of 100 tubas, a work for 80 trombones, instrumentalists playing in an elevator, and a percussion piece with an amplified cactus. The inventiveness and irreverence of Parker's programming prompted the Austin Critics' Table to give an award to SoundSpace's sprawling tribute to John Cage, Musicircus, in 2012.

Now, Parker is employing the Hesse/LeWitt pairing as a springboard for diving into a great pool of minimal music – indeed, several of the pioneering compositions of the form, penned by its leading proponents in the U.S.: La Monte Young, Terry Riley, Steve Reich, and, of course, the one minimalist everybody knows, Philip Glass. The works featured weren't all literally written in 1960, but that's the Big Bang of this little style, if you will, with lower Manhattan, where so many of the composers began their work with it as ground zero. Parts of Young's seminal conceptual work Compositions 1960 will be performed by Jason Phelps (There Is a Happiness That Morning Is, The Intergalactic Nemesis). Riley's In C (1964) has been adapted into 22 minutes of juicy repetitions by the Invincible Czars, which they'll play for dancers performing choreography by Jennifer Sherburn (Rhododendron Descent). Glass will be represented by an early work and a late one: 1+1 (1968), a work for a lone performer tapping on a table top, the sound of which is amplified by a contact microphone; and "The New Rule," a choral arrangement of the piece by that title from his 1997 opera Monsters of Grace, which NPR Music commissioned during the composer's 75th birthday year and which is designed to be performed by both amateur and professional singers. On Sunday, One Ounce Opera will lead an audience sing-along of the work. Then there's a veritable encyclopedia of Reich material: Slow Motion Sound (1967) and Pendulum Music (1968); the popular Drumming (1970-71) and Clapping Music (1972), both performed by line upon line percussion; and Different Trains (1988), a three-movement piece for string quartet and tape by the Felix Quartet (principals of the Austin Symphony Orchestra and Austin Lyric Opera Orchestra). Also on hand will be Outlier (New York-based Max Bernstein and San Antonio-based Mark McCoin); the UT-Austin Flute Choir; the Texas State New Music Ensemble, presenting Thomas Clark's Effulgence; and both Brent Fariss of the New Music Co-op and the UT-San Antonio New Music Lab will present new works.

Just the personnel involved and the music being showcased promises an afternoon of sounds as exciting and illuminating as in previous SoundSpace installments. So dress up for the New Frontier, and go give yourself an earful of subtly shifting patterns of sound.