Despite some casting questions, the Baron's Men create a moving and involving version of this well-known tragedy 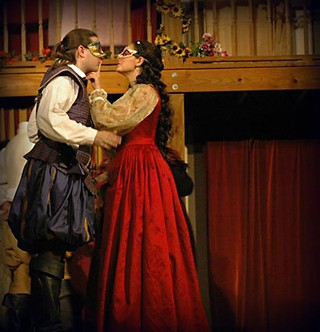 
In popular culture, perhaps no tragedy is as well-known, and as misinterpreted, as Romeo and Juliet. In Aristotle's famous treatise Poetics, he refers to "hamartia" – the hero's tragic flaw. We often think of this play as primarily a tale of star-crossed love between two young people. In truth, the story is most genuinely tragic for those adolescents' parents – the ones who have less literally taken a hand in their own unraveling, and in so doing have lost what is most important to them.

The defining moment could well be Lord Capulet's attack on his rebellious daughter, and, indeed, in this telling by the Baron's Men, his vicious promise to Juliet – that if she does not do his bidding by marrying the man he has chosen for her, she might as well "beg, starve, die in the streets" – inspired audience members to hiss and boo with zeal. Modern theatregoers have been well trained to be polite and often feel too self-conscious to be an active part of what's happening onstage. That was certainly not the case here. The Baron's Men means its work to be interactive, mirroring the performances in Shakespeare's day, and the impact of this scene was intense enough to crumble the fourth wall. Such spectatorial enthusiasm makes a night out at the Curtain Theater unique.

As Juliet and Romeo, Lindsay M. Palinsky and Casey Jones are a bit old to be believable as 13 and 16ish, respectively – a not uncommon casting problem with the leads in this play – and the unfortunate result is that their ticking-bomb behavior seems unbelievably erratic and impulsive. Other casting choices, while bordering on the bizarre, seem to work. Eva McQuade as Mercutio is clearly a scene-stealing win for this audience, which embraces an interpretation of Romeo's BFF as a cocksure female instead of an effeminate male. The sexual tension between them is thus intact, with an added layer of May-December taboo. There's no question that McQuade is entertaining, but her slapstick tone threatens to turn this otherwise moving drama into a parody.

Samantha Smith's genderbending friar seems perfectly natural, as does Maria Latiolais' adorably pixie-cut Gregory in the opening scene. The fabulous Ameer Mobarak does double duty: making a fine Benvolio and serving behind the scenes as a fight deputy. His collaboration with fight captain Jimmie Bragdon and stage combat choreographer Toby Minor merits special recognition as the onstage deaths of Mercutio and Paris seem particularly authentic and come at the end of two gracefully violent ballets. This is important in a story where hand-to-hand combat is the very center of both plot and spectacle.

The set is fairly simple, its dominant feature being that famous Veronese balcony. It's certainly difficult to make silk flowers appealing, but this venue has the wind on its side, and on a blustery spring evening such as this one, when shimmering fabrics of red and gold take flight in the breeze, the effect is majestic enough to make us overlook the shortcomings of faux botanicals. 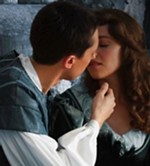 Romeo and Juliet
Penfold's condensed version of Shakespeare's play, played by five actors, brings out the heart of the tragedy 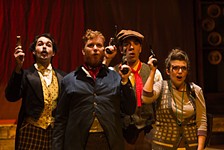