Frida be you and me: Cindy Wood does her Kahlo impression. (Photos by Alan Pogue)

There's something familiar about the way Cindy Wood twirls her breasts.

To be clear: The breasts in question are not, strictly speaking, Cindy Wood's. Rather, they're the comically outsized and low-slung fabric breasts stuffed in the old-lady outfit Wood is wearing, along with cat-eye specs and silvery wig, to grant her a grandmotherly aspect for this Esther's Follies sketch. And as excitement builds among the characters, her top-heavy senior begins spinning those over-ample orbs like a lap dancer at last call. Which would be funny by itself, just for the incongruity of a granny making like the Yellow Rose employee of the month, but something in the way Wood does it gives the gag extra comedic oomph. It's her full-bore commitment to the physical schtick and full command of it, yes, but it's also the character in which she's grounded this outrageous behavior, the person she's concocted under the getup, with her stoop and stiff walk, bulging eyes and downturned mouth. She's the kind of exaggerated comic female – a broad broad, if you will – that you'd see created by Carol Burnett on her TV show or Lucille Ball on her sitcoms or Imogene Coca on Your Show of Shows. Those women practiced a specific kind of comedy that you don't see much nowadays, one that reveled in slapstick and caricature, in funny walks, inflated attitudes, and overblown reactions, and yet always retained a layer of humanity to make the joke real. You may not see it much anymore, but you sure see it whenever Cindy Wood performs. The longtime Follies regular, who will mark the 25th anniversary of her first show with Esther's this May – a longevity second only to co-founder Shannon Sedwick among the Follies' female performers – is comedy from the old school.

Wood's classic comic style takes center stage on Sunday when Esther's hosts Cindy & Friends, a benefit to raise funds for Wood, who's seeking treatment for Lyme disease. (See "Cindy & Friends" and "Cindy & Foe.") It's given the writer-performer a rare opportunity to design her own variety show, and she's taken her inspiration from a childhood favorite, The Carol Burnett Show. Wood absorbed a lot of her comedic savvy from watching those funny femmes of yore on the tube. Moving to the States from Guatemala, with Spanish as her first language and kindergarten calling, she says, "The pressure was on to learn how to fit in quickly. I learned to become 'Americanized' greatly by watching the wonderful sitcoms and variety shows of the time."

Carol. Lucy. Imogene. Lily Tomlin. Jean Stapleton on All in the Family. Suzanne Pleshette and Marcia Wallace on The Bob Newhart Show. Ethel Merman in It's a Mad, Mad, Mad, Mad World (a fave film of hers). These were her early teachers in getting the laugh: how to build the gag, phrase the punch line, take the pratfall; the slow pop of the eyes, the pursing of the lips; the take, the double take, the ... pause. Not that Wood studied only the gals. "I just loved comedy, period – anything I could get my hands on," she says, quickly naming various wise guys she adores: Jonathan Winters, Milton Berle, Tim Conway, Sid Caesar, Bob Newhart. And it was Charlie Chaplin who influenced her first performance – a pantomime at school – which led to what Wood calls "the moment of true discovery." Before, comedy had been a family affair – working up skits with siblings and cousins at Sunday get-togethers, doing impressions of neighbors and relatives to make her ailing father laugh – but that public act stoked her passion for performing. "I was a shy kid," she says, "and all I knew was that I had found something I could do successfully and was eager to keep creating more new experiences of the like."

Wood kept performing, doing drama in high school and college at Southwest Texas State (now Texas State University), then spending a year touring Neil Simon plays – her first pro gig after graduation. It was just after Wood had returned home to Richmond-Rosenberg that a door opened to that little musical-comedy revue in Austin. Through a college pal in Houston, she took part in a video being produced for a Follies side project, which impressed then-Esther's associate John Job so that he made a point of getting Wood to audition. She drove from Houston to Austin after working a shift at a psychiatric hospital for children and auditioned before a rehearsal. Something in her self-written routine in which she danced, sang, and did five characters in five minutes must have clicked with bosses Sedwick and Michael Shelton, because even though the cast was strong with women – Sedwick, Margaret Wiley, Mandy Steckelberg, Angela Rovetto – Wood was invited into the troupe.

Upon saying yes, Wood was thrown into the deep end of the Pool: racing her scripts to Austin, being drafted into rehearsal her first night in town, and doing her first show after just two rehearsals – which surprised the rest of the cast as much as her. "I just did the best I could to retain all the direction, choreography, choral singing parts, and fly-by-the-seat-of-your-pants instruction on group numbers and backstage duties. And memorization of a long monologue by Margaret, some choice 'you better not fuck this up' lines in a couple of sketches, and lyrics learned by osmosis as there were no song sheets to go by." Rough it was, but with her lifetime of training in comedy, Wood was ready, and when showtime came, she "nailed it all." From that point, she was caught in the rapidly spinning "cogwheels on the fresh weekly comedy machine."

Over the past quarter century, Wood has grown into a classic comedienne in her own right. She can take a throwaway moment – say, sitting on a barstool – and massage it into a masterwork of physical comedy: clambering onto a stool too high for her in a too-tight dress. She can repeat a phrase a dozen times, as she does with "I do not like to slam and bam" in the Seussian parody "Sam I Am," and make each distinctly different and distinctly funny. She can take the arm-candy role of magician's assistant and mine comic gold from it, her face surprised and perplexed by her body's transformations – all without ever compromising the illusion. She can take a celebrity that everyone and his Aunt Pearl can mimic and do an impression that's fresh and funny, as she did with H. Ross Perot – a rare instance of a woman doing a comic impression of a male celeb, but Wood's take, with its windowpane glasses and elephant ears, was wildly popular and kept going years after he dropped from public view. And, of course, she can twirl breasts with the best of them.

A life making laughs hasn't always been easy. At the Follies, "the show must go on" is more than a platitude. "It means you perform whether your daddy died or not," Wood says. "Whether you should be home or not. Whether you're sick, injured, or heartsick." It's kept her from birthdays for loved ones, including her mother; from her nieces and nephews' births, and later their high school graduations; from funerals for her grandparents. But Wood believes in being there for the show, no matter what's happening in her life. That's because of the strong work ethic instilled in her by her parents, but also, she says, "There is nothing like knowing 300-plus audience members are expecting you on time every week. Not just a few co-workers, but hundreds of beautiful people are depending on you to be there. There are blessings and curses with every job. But only one elicits a round of applause at the end of every shift."

In that attitude lies a grace about as old-school as Wood's comedic style. She says she knows it's her job to do her best with the material – even when she's performed it five shows a week, 50 weeks a year, for years – and that her "sense of duty" keeps it fresh. She takes her cue from Ray Anderson, the illusionist who also joined the Follies in '89 and with whom she's worked so closely in the magic acts. "He always has that twinkle," she says, and she strives to come out with one, too, "as if it's the first time every time." She speaks glowingly of other colleagues, too, especially those from her early years with the Follies: of Amos Ewing, so generous and encouraging in developing material; of Joel McKean, and his sharp mind and wit; of Lyova Rosanoff, who nurtured Wood with food, knowledge, moral support, and guidance.

"I'm constantly learning, and I'm learning from the best," says Wood. "They're all around me, and I'm very lucky. How did I know I was going to move to Austin and be a part of a big family, a big comedy family? It's like living in It's a Mad, Mad, Mad, Mad World. It's so fun, right?"

For more images of Cindy Wood in Esther's Follies, see the photo gallery. 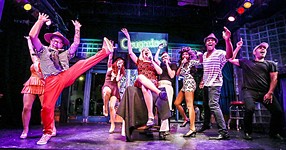 Esther's Follies: Forever Young
Even after 23 years, Austin's favorite musical comedy group, Esther's Follies, is still lively, still spirited, and the perpetual briskness and animation, the audaciousness and cheeky style, rub off on you, so that every visit is rejuvenating.