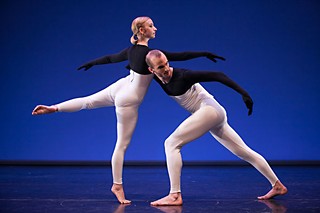 
In the past several semesters, each concert by Dance Repertory Theatre, the University of Texas Department of Theatre & Dance's undergraduate dance troupe, has included a work by a Major Choreographer. In the spring program, however, the Major Work wasn't a crowd-pleasing anchor, the performance's raison d'etre. Instead, DRT directors David Justin and Yacov Sharir programmed Merce Cunningham's 1991 "Beach Birds" as the mixed bill's opener, its clarifying habitat serving to open the gates to thornier territory.

The clarity in "Beach Birds" comes from Cunningham's use of stillness and space, and the eight dancers' birdbrained focus, sharp yet skittish, as they perform vignettes of avian-inspired movement. Danced in penguin-blocked black and white, with a live performance of John Cage's rainstick-dominated Four3 and in front of a backdrop of sunset-colored changing light, the work offered the vastness of the edge of the world.

We were led back to an unmistakably human place by student Kelsey Oliver's "The Great Green Greazy Limpopo River." In tousled white slips and boxer shorts, with layers of brown vinelike wreaths encircling their necks, eight dancers made synchronous torso-instigated movement – hip jabs, pelvic tips – before liberating themselves from the group. Helped by Rachel Atkinson's lighting that evoked both nighttime nature and snapshots, the piece needs little but a new title; the work seems to have moved beyond the current one (derived from a line from a Rudyard Kipling fable).

After intermission was a revival of Justin's sextet "Quiver," a thoughtful mash-up of techno-human and baroque that seemed to suffer from violinist Hye Jin Chang's weak performance of Bach's Partita No. 2 in D Minor; the dancers didn't trust the music. And Erica Saucedo's colorful "White Noise (RGB)" had vibrant color-change costumes (by Hope MacRoberts Bennett) and lighting (by Atkinson), but the action didn't add up to anything worth the work required to follow it.

By the far end of the program, we had reached another edge of the world, one where our bleakest insecurities, grittiest regrets, and weakest faith in others stew and swelter. In guest choreographer Millicent Johnnie's "Clear the Air," a reaction to the acquittal of George Zimmerman, we saw the hoodie as a symbol of injustice and heard journalist Martin Bashir's juxtaposition of Trayvon Martin's criminal record with George W. Bush's. The dance itself was an emotional response: In black boots and masks, shrouded in white sweatshirts, an ensemble of 16 stomped, swirled, and gesticulated, in frustration, anger, and fierceness. The negative slope of this program's mood was steep enough to be evident even in instances of character-breaking: When a pair of dancers snuck a shared smile into "Beach Birds," it was cute. But when someone, unmasked for bows, dared to grin at the audience after "Clear the Air," it seemed in poor taste.