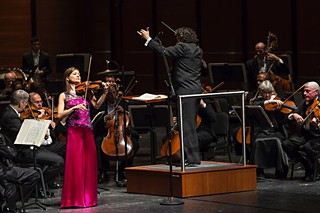 
If the Menuhin Competition is like the Olympics for the violin, then the Gala Concert with the Cleveland Orchestra on Sunday provided all the fireworks of the closing ceremony.

Under the baton of the energizing Giancarlo Guerrero, the orchestra's rendition of Antonin Dvorák's sparkling Carnival Overture heralded the three violinists of the first half. First came Junior First Prize Winner Rennosuke Fukuda playing Fritz Kreisler's Praeludium and Allegro. The 14-year-old from Japan began with full and resonant bowstrokes, filling Dell Hall with his beaming, rich sound. The sensitivity that he displayed in the connections between notes kept the listener leaning in to follow the sinuous phrases and made it easy to forget his young age.

Next was the Senior Division winner, Stephen Waarts, age 17. Performing the first movement of Sergei Prokofiev's Concerto No. 2 in G Minor, Waarts was in the zone. He climbed the mountains of tension in the score with strong psychological intensity.

As incredible as these two young violinists were, though, there was a palpable leap in caliber when Arabella Steinbacher, a competition juror, performed Maurice Ravel's Tzigane. From the first phrase she played, it was clear that we were in the major leagues – the main difference being that this seasoned professional was willing to let loose. She pushed the boundaries of her technique, sometimes exploiting the gritty sounds that students, working on refining their skills, are less likely to explore. It takes experience, in the practice room and on the stage, to develop enough vulnerability to take technique to the limit. She wasn't afraid to drive the bus, either; she took an active role in directing the orchestra's dynamic tempo changes, which transformed what is often presented as a flashy showpiece into an evocative and poetic celebration of timbral possibilities. Her gutsy and brilliant performance was, in a word, inspiring.

For the program's second half, the orchestra brought Pyotr Tchaikovsky's Fifth Symphony to passionate life, from its despairingly dark opening to its unabashedly triumphant finale. One of the most riveting moments was the clarinet's almost inaudible release at the end of the second movement. The hall was filled with the weight of this magical silence.

I was struck by how many times during the concert I thought, "Wow, what great ___," filling in the blank with oft-neglected auxiliary instruments: bass trombone, piccolo, violas, tambourine. With such an all-star team, the orchestra adds up to something greater than the sum of its parts. When an orchestra functions as an organism, it moves and breathes together in a beautiful way that is both rare and exhilarating.

Even though the Cleveland Orchestra doesn't come to Austin every day, the receptive audience signaled an intense craving for world-class artistry. Each hair-raising performance was followed by a big standing ovation. Austin is growing and maturing, and as it does, it wants more great art. I was heartened to see such an enthusiastic reception for an out-of-town orchestra at an international event, and the conductor appeared to be, too.