'FOUND: Photographs of the Rolling Stones' 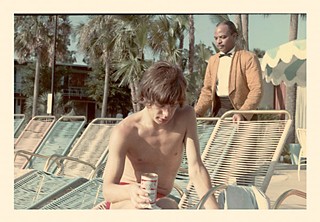 Rare photographs of the Rolling Stones are on view in Austin – snapshots showing a relaxed and casual group of young men enjoying the early stages of superstardom. The 23 small-format photos, taken during the band's 1965 American tour, depict all of the original Stones – Mick Jagger, Keith Richards, Brian Jones, Charlie Watts, Bill Wyman, and founding member and road manager Ian Stewart – taking in the motel environs of Savannah, Ga., and Clearwater, Fla.

The youth of these six young men jumps out of each frame. Mick looks like a sunglasses model, and several images feature members of the band looking directing into the camera, breaking down the fourth wall in a powerful way. Most were taken poolside, which offers a chilling image of Brian Jones. With a large motel sign in the background, Jones does a handstand in preparation for a jump into the pool. Four years later, he would be found dead at home, drowned in his own pool – a dark backstory for a bright, shiny image.

The story behind these photographs is as interesting as the pictures themselves. They were discovered in a flea market in southern California by Lauren White, a musician, and her father. A dealer called her over to his stand to look at them. He clearly didn't know what he had, White told Cool Hunting's Vivianne Lapointe in an interview, but she admits that she didn't either. It was only after doing research that she came to believe that the images hadn't been published or seen by many people since they were taken.

Working with George Augusto of Los Angeles' Dilettante Gallery, White contacted Allison Gorsuch and Taylor Livingston of Apart Productions, an art project management firm, to advise them. After reviewing the photos, they decided to create a gallery showcase of the images. With the negatives unavailable, the prints were taken to a professional lab to be scanned and enlarged. The enlarged format allows the viewer to bask in fame not yet solidified into caricature. The colors are muted in the way one would expect for photographs a half-century old. The palette lends an authenticity, connecting the group with the time. "FOUND" debuted at Dilettante in 2012.

The photographs made their way to Austin through Livingston, who's both the director of the Hopper Art Trust, managing the late Dennis Hopper's artwork, and the curatorial director of the DEN, a real estate office cum art gallery on the ground floor of Austin's W Hotel. After setting up their real-estate studio in the northwest corner of the W block, co-owners Bryan Cady and Will Steakley decided to take advantage of the large walls and open two-story structure to bring art into the mix. The DEN's first exhibition showcased artwork by Joe Ely and his daughter Marie. "FOUND" is just the venue's second show. While there is no gallery receptionist to greet visitors, all are welcome to walk in and enjoy the work.

Just as the provenance of the photos is unclear, so too is the photographer. The Stones have seen the pictures and even used a couple for a tour slideshow, but no one can say who took them. Because he appears in only one of the photographs, Keith Richards is the best guess for the mystery snapper. But considering how much has happened since 1965 – especially for this hard-living group – the mystery may never be solved. "FOUND" lets us see the band before all that hard living went down.

"FOUND: Photographs of the Rolling Stones" is on display through March 14 at the DEN, 317 W. Third. For more information, visit www.denpg.com.