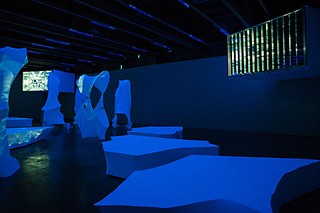 The Contemporary Austin at the Jones Center, 700 Congress, at Laguna Gloria, 3509 W. 35th
www.thecontemporaryaustin.org
Through March 15


If, in walking through CATALIN at the Contemporary Austin's Jones Center, you get the feeling that Charles Long is having 10 conversations at once, that's because he is. The artist's practice, which draws heavily on collaborations of all stripes (designers, musicians, architects, perfumiers), is both his great strength and his weakness. Strength because collaborations allow Long to build sensorily immersive, many-tentacled installations that have the capacity to awe and overwhelm; weakness because some of the critical moves that the artist and his collaborators attempt fall flat, getting lost in the white noise of the installation. For example, downstairs in the Congress Avenue space, a septet of 3-D printed sculptures formally resembling architectural models of icebergs, house a corresponding number of custom-made fragrances. The icebergs' craggy forms are the result of curated data sets, which, if curated more thoughtfully, could deliver scalpel-sharp critique without losing any of their humor. The concatenation of quinoa import/export tonnage, Blackberry stock prices, the street value of crack, and the median Hollywood fantasy movie budget yields a great title (Investors Bullish on Fantasy Quinoa Despite Lackluster Crackberry Performance), but little in the way of real insight.

The exhibition gets its name from a plastic compound developed in the early 20th century and scrapped because of its toxicity (formaldehyde was an ingredient), and the material takes a star turn upstairs in Long's inspired total-installation. A small yellowing bar of the stuff is loaded into a harpoon-like contraption (ships and portholes are a recurring motif), the purpose of which, it seems, is to gently grate the plastic as though it were Parmesan instead of a carcinogen. Centered in front of a mushroom-topped mihrab made of repurposed agri-waste, Long's meditation on the meanings of material is stunning in places such as these.

Much more playful, focused, and – I needn't hazard a guess – populist are the candy-colored outdoor sculptures that comprise the second half of the Contemporary's Charles Long-a-thon down at the Laguna Gloria campus. Looking like overscaled spleens and tumors on holiday – lounging lubriciously on picnic tables and plopped majestically in the woods – Long's Pet Sounds was initially installed in the Madison Square Park Conservancy in 2012. Here, they link Liam Gillick's recent social sculpture and Marianne Vitale's totemic railroad ties (go a little further and treat yourself to a quiet and strange Nancy Holt sculpture that no one ever talks about). When touched and caressed – hugged, even! – the sculptures emit strange loops of sound mostly at odds with the serene Beach Boys melodies referenced in Long's title. Like the Gillick and Vitale, the Contemporary has the opportunity to purchase this gaggle of sound-sculptures, and as long as upkeep and conservation aren't too prohibitive, judging from the response of children and adults alike, it would be wise to do so.