In a beam-exposed, remodeled garage, this artist prepares to send her work off into the world 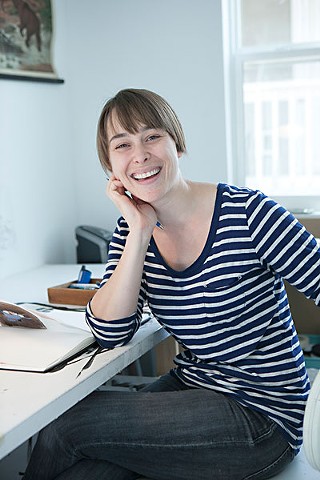 "People who have seen my work, but who have never met me often think I'm a goth, or a witch," says artist Katy Horan earnestly. "I tried to be a witch, believe me, but it's just not me." Horan's work, which tends towards the minuscule and finely detailed, is composed of the fantastic, ambivalent building blocks of folkloric tradition; Appalachian granny women (the curandera-herbalists of the Ozarks), Victorian ladies, and spirits share pictorial space with one another, acting out supercharged dramas whose intricacies we might only guess at. Horan's studio, a beam-exposed, remodeled garage in the backyard of a Shoal Creek house, is organized and warm. Horan, who admits to "needing a break from making really exacting work," tries her hand at clay or papier-mâché figurines which – half-finished – dot the working surfaces and windowsill of her studio. As comfortable researching murder ballads and folktales as she is spending hours on a single figure, Horan's mind is exacting and tenaciously curious. 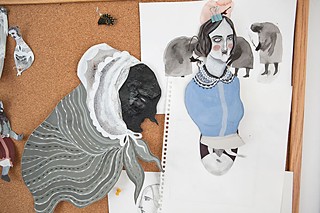 Katy Horan: This may not be the best studio visit because I'm just framing and about to send some work out, so I'm not really "in process."

Austin Chronicle: That's OK. We can talk about finishing. So where is your work going?

KH: I have a show at LQV Gallery in Oakland which opens on March 8th. I have some work that's not here in the studio because it's being photographed. I started taking my work to get photographed because I'm so sick of taping things to the fence, taking pictures, and doing a terrible job!

AC: Did you know what that show would consist of before?

KH: Yes, it's work left over from an exhibition from October. I work slowly, so I have to use what I've got.

AC: Do you find yourself at odds with that fact – being a slow worker – and the imperative to produce ever-new work?

KH: No, because that's always better for me. I have pushed myself to go bigger, but the fit is not a natural one. People always tell me to make my work bigger, and I don't think I need to. I like to pull people in. Also, I don't think there's a formula for selling things. It's so random that I never know.

AC: And what's it like when all your stuff has left the studio?

AC: It seems really exciting to get the work out, but is there a loss, too?

KH: There's always a depression that happens for me. Not just when the work is gone, but when it's out there and people are looking at it. I struggle more with that, because I've been showing long enough that I'm better than I used to be at managing my expectations. There's always a letdown with shows like the one I'm sending work off for, because I'm not going to be there for the opening, I'm not getting that feedback on the work. I have no idea what people are saying, and if there's no review, then I have no idea – and that's almost worse. Good or bad, I can take.

More of Katy Horan's work can be found at www.katyart.com and the website of Flatcolor Gallery in Seattle, www.flatcolor.com.

To see more photos from our visit with Katy, go to www.austinchronicle.com/photos. 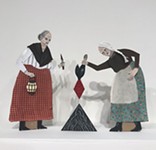 “Katy Horan and Teruko Nimura: Residual” at ICOSA
In their joint show, the two artists use paper crafts as a medium for exploring how traces of the past disrupt the present