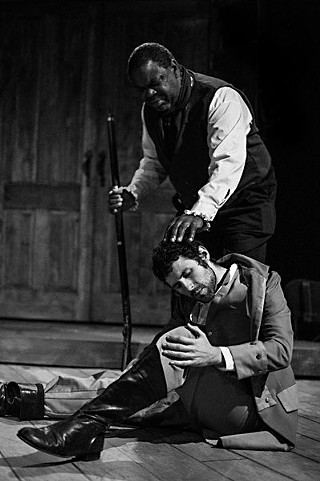 The slave blessing the master: Robert Pellette's Simon and Andrew Bosworth's Caleb in The Whipping Man (Courtesy of Aleks Ortynski)


For the three men camped out in the decaying Virginia manor, observing Passover is not easy. Four years of war have left Richmond depleted of goods, and this once-stately home was long ago looted of everything valuable by marauding soldiers, blue and gray. But for two of these men, the Seder holds special meaning this year. They will mark the rite that keeps the Chosen People mindful of their captivity in Egypt just after having been freed from slavery themselves.

The sight of two African-American men devoutly celebrating this ancient Jewish ritual days after the South's surrender at Appomattox – and doing so with a man whose family, until recently, owned them – gives Matthew Lopez's drama the feel of terra incognita. Civil War drama has rarely shown the divide between white and black, owner and slave, bridged by faith, and when has it shown it through this faith? And yet a culture in which slavery and deliverance out of it loom so large proves a powerful lens for considering this grievous, bloody stain on our history. The inhumanity of the "peculiar institution" comes into even sharper focus when viewed as a betrayal of your brother in blood, enslaving him even as you recall your shared ancestors' bondage with bitter herbs.

In City Theatre Company's production, the story can be read in the knitted brows of its actors. As Simon, the elder of the freedmen and a man of piety and patience, Robert Pellette keeps his brow so low and deeply furrowed that it seems to bear the weight of the entire Civil War. Simon treats the son of his onetime master with respect, even kindness, out of a kind of loyalty, but he's keenly aware that he is no longer any man's chattel and won't suffer the indignity of being ordered about; for him, the war's outcome is the difference between being told to do something and being asked to. John, his fellow in servitude, is a born survivor, raiding abandoned homes for whiskey, china, and anything else of worth, and Richard R. Romeo wears John's opportunism lightly, but the pinched lines above his eyes betray his bitterness toward his former keepers, especially the man who lashed his back with a pearl-handled whip. The brow of Andrew Bosworth's Caleb, the slaveowner's son, is also creased with resentment, but his is toward God, for allowing this war's atrocities, which he witnessed firsthand in the Confederate trenches and which cost him a leg (amputated in a harrowing scene).

Director Stacey Glazer is in no hurry. She allows the characters' confusion and questioning to play out in pauses and moments of reflection, giving the play's momentous concerns room to land, in the characters and us. The actors don't always fill these spaces with the depth of feeling or intent to sustain dramatic momentum, but you can sense through the performances how much the play matters to them, and their commitment keeps its lessons echoing in our heads. There are many kinds of chains, some that can be broken and some that never will be if we do not remember.