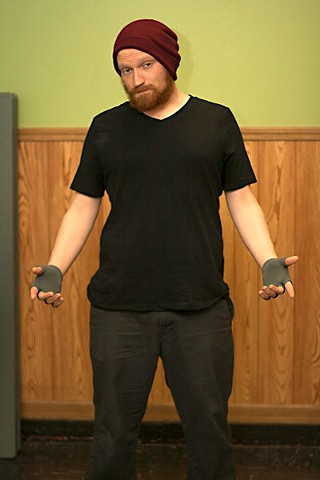 A playwright named Samuel D. Hunter – the same Idaho native who won an Obie award for his A Bright New Boise in 2011 – recently wrote a full-length drama called The Whale, an emotionally complex story of a man named Charlie who, in response to a horrible event in his life, has begun eating himself to death. Which is why, in the play, Charlie's tipping the scales at somewhere around 600 pounds. Which is why, for the play, lead actor Shanon Weaver will be wearing a custom-tailored, natural-looking, size-appropriate fat-suit.

Note: You may recall Weaver from his popular show, HIT., staged at Hyde Park Theatre under the aegis of production company A Chick & a Dude, run by Weaver and his wife, Melissa Livingston-Weaver.

We're glad to know that The Whale is, from all reports, a strong piece of theatre – regardless of any extraordinary costuming requirements. New York-based Hunter is one of those nationally up-and-coming sorts, one of those Writers To Keep Your Eyes On. And Austin's Chick & a Dude – they've been working the theatre scene with shows for almost a decade now: surely worthy of coverage for their latest endeavor?

But, OK, what we really want to know about is this fat-suit.

So we sat down with actor Weaver, director Livingston-Weaver, and fat-suit designer Kelly Ruiz, and we, ah, got the skinny on the thing. Austin Chronicle: Was it hard to find a fat-suit that big?

Shanon Weaver: We lucked into it, actually. We didn't know what we were going to do, at first.

Melissa Livingston-Weaver: We were thinking about several different options: building it from the ground up, purchasing something? Because we'd already found 300-pound fat-suits online, and maybe somebody could build onto that? And that's when Shanon approached Kelly.

Kelly Ruiz: And we talked about the options, and what we could get within budget, and what would work on Shanon for the show. And it ended up that UT already had a, I'd say about a 350- or 400-pound premade fat-suit that they rent out. It was made by Christina Hobbs, an MFA costume-technology student in 2008; it was her thesis project, and it's a pretty awesome fat-suit. So we took that, and we've been adding things on and adding things on, until we got the 600-pound look. We used different fabrics and material, and it still looks pretty natural.

AC: Did you use, what, reference photos for comparison?

Ruiz: I went online and looked at actual people who are 500-600 pounds. What's interesting is that they're all very different, depending on their body type and how they hold their weight. It's a combination, because we built onto a suit that already has its own shape, and Shanon has his height, so we tried to build it based on what the suit looks like and what all these people look like. 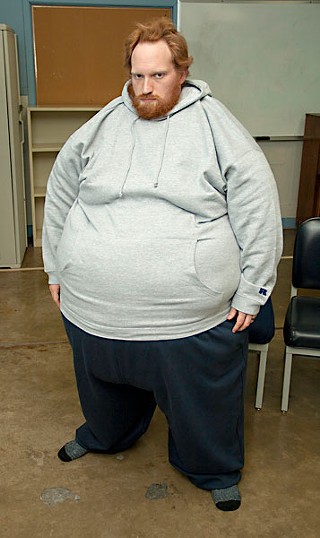 ... and after (Photos courtesy of Christopher Loveless)

Weaver: That's what's pretty cool. The base that we're building off of was not that heavy to begin with. It's sturdily made, but very lightweight and very mobile.

Ruiz: The original structure was made with boning, netting, and foam, and the boning allows for the lightness while capturing the appearance of weight. It's pretty much hollow: The arms and the legs just hang there, with a spiral boning structure. The heaviest part is the main mass, but that's made of foam – which is light. So it was maybe ... 10 pounds?

Weaver: If that. When I first put it on, more like five pounds. But now, with what's been added to it –

Ruiz: We made beanbags, for fat rolls, that are heavier – but they hang naturally and look more realistic than anything else we've used. So that makes it a little heavier, but the sense of weight that it gives the suit is a lot more natural. And then, for the main mass on the stomach, we used foam and polyfill batting, and kind of made a giant pillow? Now the suit's more like 10 or 15 pounds.

Weaver: It's more cumbersome than heavy. I spend most of the show sitting down, but I've been rehearsing in the suit and, yeah, you know, it's so lightweight that I could get up and dance if I wanted to – and I have, for everyone's amusement – but that's actually one of the challenges: Since it is so light, the actor has to endow that weight with the way he moves. I've done some rehearsing on my own, with 30-pound dumbbells on my chest, and used ankle- and wrist-weights, just so I can see how it feels and get the proper movements, the range of motion and everything. And I think I'm doing all right. 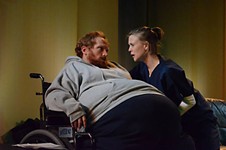