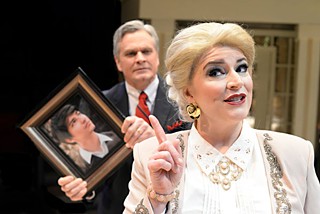 
The trials inherent in staging classic works make the director's job tantamount to that of a translator. In this case, even Ranjit Bolt's translation of Molière's best-known work – considered to be more colloquial and "looser" than many other versions – needs a physical guide to ferry the language across the centuries.

With director David Long at the helm of this Mary Moody Northen Theatre production, what might otherwise seem like overlong passages bogged down by antiquated verbiage are infused with light and life. In a contemporary setting, a single umbrella becomes the pièce de résistance in the annals of propdom – such a primary role it plays in a handful of masterful comic moments. Likewise, humanizing tactics such as presenting characters in various states of undress and the artful incorporation of an exercise machine and a voice-stifling vacuum cleaner put a spotlight on the extent to which the directorial touch can make or break a show.

The recorded music – impassioned string versions of rock classics from Guns n' Roses and Lynyrd Skynyrd, among others – serves as a fitting reminder of the challenges and rewards of reinterpretation.

The story revolves around a family under the spell of their boarder, Tartuffe, whose claims to be a virtuous man of God are totally fraudulent, yet the man of the house, Orgon, can't be persuaded of this. A plan is soon hatched to marry Tartuffe to Orgon's daughter, effectively masking the interloper's secret desire for Orgon's wife, Elmire.

The decision to cast a young actor, Jose Antonio Rodriguez, in the role of Tartuffe, turns out to be a good one, as it makes his seduction of Elmire all the saucier. Although very attractive, Liz Beckham's Elmire appears old enough to have mothered this cardigan-clad, iPod-adorned Tartuffe, and thus, l'imposteur comes off as a cross between Eddie Haskell and an aggro version of Dustin Hoffman's character in The Graduate.

Audience members looking for a clear connection between the themes of questionable piety that grounded the play in 1664, and the religious zealotry sometimes found in upper-middle-class living rooms like this one, may find themselves scratching their heads, particularly considering that the work is being staged at a Catholic university. Still, the attack on hypocrisy is clear (religious or otherwise).

As an entertaining night out and a showcase for the work of Long and a fine cast of actors, including Equity guests Beckham, the always formidable Barbara Chisholm (who is, full disclosure, married to Chronicle Arts Editor Robert Faires), and the subversively authentic David Stahl, the show is a fantastic success. 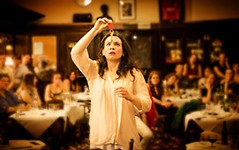 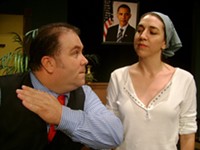