Stephen Sondheim's tale of the Demon Barber of Fleet Street gets a playful, minimalist revival at UT 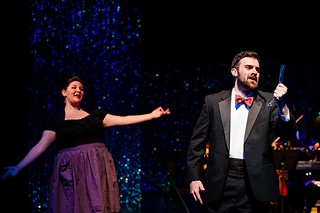 A match made in hell: Mrs. Lovett (Olivia Douglas), Sweeney Todd (Chance Eakins), and his razor (by Nathan Russell)

That cheery image provides our first impression of Sweeney Todd in Stephen Sondheim's 1979 musical-or-perhaps-opera (the jury's still out, believe it or not), and by the time the prologue completes its portrait of him, we're steeled to meet a gruesome, grotesque figure, more corpse than man. Imagine then, our first sight of this "Demon Barber of Fleet Street" as a lift raises him slowly from the orchestra pit, nonchalantly lounging on a park bench, nattily attired in a tuxedo.

This impish subversion of our expectations was one of many playful touches in the University of Texas' Butler Opera Center production. Rather than immersing us in a grimy, gloomy, Industrial Age London as in the original production and so many since (including one by the Department of Theatre & Dance in the Eighties), director Joshua Miller took his cue from the minimalist reinventions of more recent years and had his cast perform in mostly modern dress on a bare stage, with a handful of set pieces and props – a butcher-block table, a rolling pin, a traveling metal staircase, a birdcage – to set the scenes. Though the cast was not limited to the 10 singing roles and did not accompany themselves on musical instruments, as in John Doyle's 2004 revival, that groundbreaking production's influence was felt. The city of London – that "hole in the world like a great black pit," as Sweeney calls it – was no longer the visible character that it was in more grandly designed productions; the focus was firmly on the people and their story as told through Sondheim's compelling – and at times, repelling – score.

That made sense for a production in a school of music cast with students training in voice – and the music and singing here were consistently rich and lovely – but such an approach requires a strong theatrical sensibility, since each thing that does appear carries more visual and symbolic weight than in a traditional staging. Most of Miller's choices gave either a simple, sober nod to the tale's horror – a red stool for the barber's chair in which Sweeney slits his customers' throats, red handkerchiefs popping from the victims' hands at those throats after the fatal deed – or a wink at its mischievous sense of humor: Sweeney's partner in crime, Mrs. Lovett, retrieving his long-lost razors from conductor Kelly Kuo; Sweeney reading a copy of The Daily Texan. A few, however, served the show less well: The curtain of blue Mylar strips backing the stage seemed incongruous even for a concert staging of this particular work, and its constant shimmering in the light proved distracting as well; the power and drama that the 25-member chorus brought to the tale was undercut by their portrayal of the inmates of an insane asylum, which came off more goofy than creepy; and while the modern formal dress on some characters didn't detract from the drama, the tux on Sweeney seemed less, well, fitting as time wore on.

Fortunately, clothes in this instance did not make the man. Chance Eakin's deep voice plumbed the depths of Sweeney's madness, and in his squinty stare we could see the hellscape of London that the demon barber saw. He sounded like a man on edge, a man with nothing left to lose, a man you did not want to cross. Eakin's intensity found an ideal complement in Olivia Douglas' Mrs. Lovett, whose beaming smile seemed inextinguishable, even in the most grisly situations (say, making meat pies out of whatever flesh was, um, lying around), and the eye she kept on Sweeney held a longing that was almost innocent. Still more impressive was Douglas' quickness with Lovett's notoriously intricate patter; she bounced through even the trickiest numbers, landing every joke that raced by. She and Eakins anchored the show, forming the kind of team, dramatically and musically, that has made the show so memorable. They were a pair of murderers to die for. 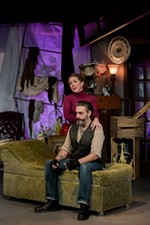 Review: TexARTS Theater's Sweeney Todd
Despite fruitless tweaks to the storytelling, this is a tale that still has bite