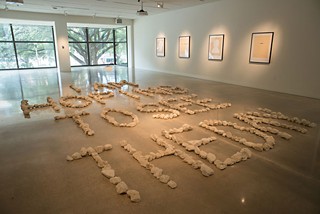 Exhibition image from "What We Want, What We Believe: Towards a Higher Fidelity" (Courtesy of Sandy Carson)

"I finally feel I'm 100 percent there," says artist Juan Capistran, "into the way I make work, my process, and the kinds of conversations I want to have." Born in Guadalajara, Mexico, and raised in South Central Los Angeles, Capistran is deft in what we might hazard to call recombinant history, meaning: By breakdancing atop a Carl Andre floor sculpture, he creates a third term that neither minimalism nor hip-hop culture could rightly claim as its own. Capistran's work is on view currently at the University of Texas in two exhibitions, both curated by Rose Salseda, a Ph.D. candidate in Art History. In the Visual Arts Center's "What We Want, What We Believe: Towards a Higher Fidelity," the artist riffs philosopher Albert Camus and Black Panther Huey P.Newton off each other, sustaining and suggesting a revolutionary politics that isn't romanticized or forsaken. In the Warfield Center for African and African American Studies' ISESE gallery, Capistran's work is placed in correlation with that of Austin photographer Ricky Yanas. The Chronicle called Capistran to talk about politics, history, and community. (A longer version of the interview is available at austinchronicle.com.)

Austin Chronicle: Can you talk about your source material for the exhibition involving Huey P. Newton and Albert Camus? In their work, both respond to the possibility of revolution or systemic change.

Juan Capistran: This body of work specifically began around 2012 with the exhibition "White Riot... be the beacon, be the light. KO'd by love." at the Thomas Soloman Gallery in Los Angeles. That show was composed of the five images in the ISESE Gallery. The ideas of revolution, change, rebirth, and hope come from that exhibition. That was a moment in time where I was questioning my role as an artist. Actually, that body of work was going to be the end of me as an artist. I had gotten to the point where I was really unhappy with a lot of the things going on around me in the art world. I wanted to throw in the towel. This idea of fading to white, of death and its rendering, were the beginning of the "White Riot" works. Yet the more I thought about the work, and what I've always been interested in and talked about with my projects, I said to myself, "Wait, I can't give up!" The work went from dying/stepping into the light to tabula rasa/beginning anew.

AC: What about the Huey P. Newton and Black Panther influence in the exhibition? Since the Panther's second major chapter (after starting in Oakland, Calif.) was in South Central, was that part of your experiences and cognizance growing up?

JC: All the work I do is heavily influenced by and filtered through African-American culture. I grew up in South Central in the late Seventies and Eighties, and it was still predominantly African-American. I went to public schools with instructors that were part of either the Black Panthers or the Nation of Islam. At the same time, though, it was confusing because I was not black. I'm interested in cultural hybridity and cultural identities constantly in flux, because in that model different identities are influencing each other.

AC: What's interesting is that your work is in dialogue with work that D.J. Martinez created while in residence at Artpace in San Antonio – which also references the history of the Black Panther movement through the formal tactic of the silhouette. He used marble.

JC: You're the first to get that! That was a subtle reference to Daniel. He was and still is a mentor of mine, and we've become good friends over the years. That's something that I'm glad you brought up. I wanted this specific show to be more overt and aggressive – I wanted tension. Whereas I think the two previous bodies of work were more subdued. This being the end of this trilogy, I wanted the show to be me drawing the line in the sand, asserting my position as an artist. Telling a viewer, "This is what I'm talking about. This is the conversation I want to have." Daniel does that. That's why the text is very heavy – especially if you're able to decode it and go back to its point of reference. I've been thinking about how from "White Riot" on, I've shifted gears formally. In a funny way, I keep thinking I took a giant leap forward, but at the same time I dug deep and pulled from things I was thinking through 10 years ago. It's circling back and digging deep into the things that have influenced and shaped me. It's not static or rigid, it's in flux and growing. I feel it changing. It's exciting.

"What We Want, What We Believe: Towards a Higher Fidelity" continues through March 8 at the UT Visual Arts Center, 2300 Trinity, UT campus. Juan Capistran will give an artist's talk on Thursday, Feb. 27, 5pm, in Rm. 1.120 of the Art Building, 2300 Trinity. For more information, visit www.utvac.org.

"Historical Present" continues through May 13 in the ISESE Gallery in the John L. Warfield Center for African and African American Studies, Jester Center A230, 201 E. 21st, UT campus. For more information, call 512/471-1784 or visit www.utexas.edu/cola/centers/caaas. 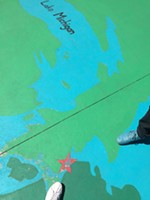