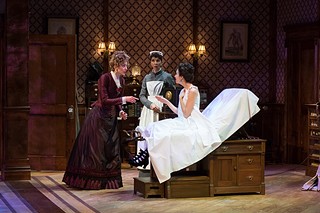 
Any night out at Zach's shiny new Topfer Theatre is a reminder that we're not in Kansas anymore. Women in full-length fur coats are a standard feature here now, in a town well known as the state's vegetarian oasis. With the glaring exception of one young woman with bright red dreadlocks, the crowd for this show is full-on Dallas pomp. Yet this façade of upper-crust propriety – both off stage and on – is shattered by the carnal subject matter of Sarah Ruhl's Tony Award-winning play.

Although at its most simple, the story revolves around the invention of the world's first sex toys, In the Next Room is really an examination of that germinal moment when the needle of our cultural compass changed direction. Prior to the massive implementation of electricity, couples huddled together to stay warm – even after the flame of a new romance died down. Necessity kept us close – at least physically. Yet how intimate were we, really, if men were the only ones really enjoying sex?

Ruhl is clearly a graduate of the Charles Dickens School of Character-Naming as her Dr. Givings (Craig Mungavin) generously devotes himself to the task of curing Victorian women who suffer from "hysteria" through the use of his handy electric massager. Meanwhile, on the other side of the good doctor's closed office door, his wife (Jill Blackwood) suffers herself, feeling inadequate because her milk is not plentiful enough to meet the needs of her new baby. She bonds with the doctor's otherwise satisfied customer Mrs. Daldry (Amy Downing), who can't have a baby at all – both are women struggling to define themselves as champions in the age of The Good Mother. However, to this viewer, Ruhl turns up a full house and not a royal flush when it comes to building characters who transcend gender roles of the time.

Technically, the set design by Moria Sine Clinton is a real wonder, and theatre patrons aren't likely to witness this level of sumptuous detail elsewhere in the capital city. The wealth of 19th century decorations includes four wallpaper patterns, stained glass, crown molding, wall sconces – no stone is left unturned in the quest for realism. The one remarkable departure occurs in the show's dazzling, snowy denouement.

The title aside, audiences should be aware that paroxysms occur in full view, albeit with clothing intact. Still, this is no peep show. Although squirm-worthy, the effect is about as sexy as witnessing someone's private moment on the toilet. Nervous laughter abounds.