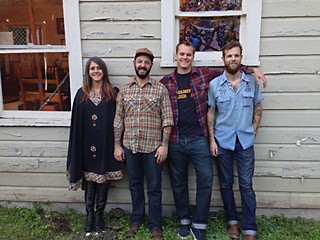 Just down 49th Street from Airport Boulevard sits a very uncommon house. Full-time studio, part-time gallery, and temporary home for numerous visiting artists over the past three years, this humble bungalow has provided Austin with a continuous stream of contemporary art peppered with unorthodox exhibitions and events. It is a home of risk-takers. Studio holders Rich Cali, William Gaynor, Conner O'leary, and Autumn Spadaro started the arts locale, along with Adam Mendez, who has since moved on to a career in design out of state. Gaynor recalls being introduced to Spadaro and Cali by mutual friend O'leary on the front porch to sign the lease – a leap of faith that set the tone for the next many months. Risks taken have given this building and community, branded Common House, an appearance and vibe that may not be as refined as the usual gallery or studio. However, what Common House lacks in refinement, it makes up for in deeper considerations, drive, and unabashed grit.

Exhibitions here are usually chosen with an eye for high-level craftsmanship and a good dose of irreverence. They have a propensity for matte finishes, dry woods, and sun-bleached color which, along with the aforementioned traits, somehow embody Austin's rural/urban split personality. In addition to multiple discrete works, each show includes some element of installation. That has taken many forms: oversized stenciled silhouettes that flatten three-dimensional space, crossing every plane of the gallery to hide behind framed works ("We Used to Walk," Colin Holloway and Michael W. Hall); floor-to-ceiling diagrams, grouping paintings together to form a cryptic single piece greater than its parts ("Phantasms of the Living," Heather Gabel); timber-lined tunnels, weaving through the house and spilling visitors into the backyard ("You Can't Get There From Here," group show); and a full room conversion from studio space to culture-blending honky-tonk pseudo-shrine, lit in equal parts by candlelight and neon signs ("Cowboys & Indians & Indians," William Gaynor). There's a strong inclination toward immersive experience. The exhibitions are fun and thoughtful – cerebral without being pedantic. At times, though, the irreverence gets the best of the group with some works and shows that break up the space or seem geared to make outsiders squirm. "A Touch of Class" by arts collective Public School is the most shining example, with its large wall exactingly painted with a large graphic of an anthropomorphized pile of poo vomiting up green bile, and its large text cut from construction paper reading simply "BALLS." This deliberate irreverence even extends to the archive in which images of previous shows alternate with photos of what seem like chemical-induced reveries or folks flipping the bird at everything: people, money, the camera, inanimate objects. But even in these peculiar calling cards, something feels calculated, as if their makers are saying: "Yes, we are artists. Yes, we put on stunning shows. Yes, we've built a unique community. No, we couldn't care less if you think we're esteemed professionals."

"There have been some failures along the way. Some overly ambitious ideas." says O'leary. There's the large-group collaborative indoor mural which was reevaluated and abandoned before completion or, most memorably, the Dead Tree Monument. After a beloved lifeless tree had been removed from the yard without warning by the landlords, the four decided to erect a memorial in its stead. They cemented a few two-by-fours in its place and attached various ephemera from the studios. A toy train was tacked on at some point. By the light of day, the monument "just looked like tweaker art" and a great deal of time was spent uprooting the eyesore from the yard. The studio holders can offer countless other anecdotes along the same lines.

This willingness to experiment and fail, and the camaraderie necessary to move on without a second thought, are the real driving forces behind Common House. The group's bold lineup of exhibitions has tested and occasionally broken the unspoken boundaries of contemporary art. They work with those on the fringes: designers, street artists, furniture makers, illustrators, and others sidelined by purely academic thrusts. From an outside perspective, some of these choices may seem to have been made naively, but after speaking with the Common House founders, it's clear that their decisions come from a place of deep consideration and grounded perspective. These folks know exactly what they are doing.

Many contemporary art aficionados may have eyed the recent exhibition "Rock of Ages" with skepticism. Hosting work by tattoo artists – timed for the Star of Texas Tattoo Art Revival – is a step away from the usual role of contemporary art spaces.

"We were hesitant at first," Gaynor says, "We didn't just want it to be a bunch of traditional flash, but these guys were all artists before they ever put ink to skin. In conversation, they'll bring up anything from the surrealists to postmodernism, and most folks don't expect it from a guy with tattoos all over his head." 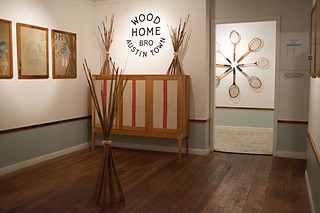 "We wanted to make this about work that they normally don't have an outlet for," adds Spadaro.

From Cali: "The tattoo artists would come into the space after spending all day at the festival, sit down, pick up a brush, and paint the rest of the night. They've got serious dedication, and we're happy to give them a space to work while they're here. It's not all that unusual. We've had exhibiting artists come in a few days before an opening, work all day in the space, sleep in the gallery, wake up, work all day again, sleep in the gallery, work some more, sweep up, and open that night totally exhausted. Then the next day, they're back again working on something else."

Common House is drawn to the tireless, dedicated artist. It seeks these individuals out and offers a framework. With little to no guidance, the artist is given space to create, an exhibition to work toward, a team that will promote them, and free rein over the outcome. Common House focuses the energy of those whose energy seems boundless. Working from the idea that arts locales have a responsibility to stitch together disparate elements of the scene, the studio holders choose these individuals without regard to media, age, or affluence, but solely on the quality of and dedication to their art.

When talk turns to what the city scene is, what it boasts and what it lacks, these artists make clear that they believe Austin lays claim to a wealth of talent, citing MASS Gallery and zine publisher Crummy House by name. Asked why Austin's art scene hasn't found the footing that, say, Houston's has, they pause thoughtfully before offering surprisingly insightful answers. Instead of the usual "there's more money in Houston," which they address and dismiss, Gaynor says boldly: "There's no reason why Austin shouldn't be the South­west arts hub connecting New York and L.A."

It's a very optimistic assertion. Yet with Austin being the fastest growing city in the country, with its relatively strong economy, increasing influx of corporate capital, and vast and talented population of artists, why isn't it meeting its visual arts potential?

"I think there's a stubborn generational gap," offers Spadaro. "With few exceptions, we get the 20-40 crowd at our shows, and it seems to be the same elsewhere. We've got a lot of support. Some of our viewers buy work almost every month, but there does seem to be a price point in Austin where nontraditional art stops selling. It may be the expendable income of the younger generation hasn't swelled to the point of being able to support artists in a bigger way."

Cali adds, "Our role in the whole thing, after keeping our own practices going, is to keep showing work, keep things fresh, and maintain the sense of community. I don't think we've ever really turned a profit. All the money goes right back into the space."

Common House is fearless. Faced with criticism that can keep some artists within certain parameters or assertions that some associations will diminish one's clout or tarnish one's "contemporariness," they keep forging onward, maintaining their mission to the communities they serve. Like many galleries in Austin that don't turn a profit, they deserve to. One hopes that when Austin residents catch up to those in Houston, or even San Antonio, in their purchasing power for bold, local contemporary art, Common House will be among the first spaces to feel the benefit.

It's these attitudes, this grit, its DIY mentality, and a sense of purpose beyond profit that lift up Common House and like-minded art spaces. The founders' youth belies their insightfulness into Austin's art scene and its broader context. The space remains fertile ground for experimental work. Like its founders, Common House doesn't fit into any easy mold. It's part publishing house, part exhibition space, part studio, part arts advocacy group, part community center. It's far from polished, a bit fast and loose, but it might be just what Austin needs more of. 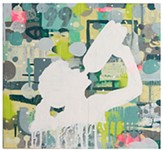 "Neil O'Brien: (I saw You) Chugging from a 2 Liter"
Easy drinking in O'Brien's Common House solo show of prints and paintings