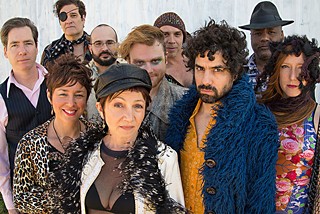 The orchestra of The Bowie Project (Courtesy of Stephen Pruitt)

Andrea Ariel wasn't that sold on The Man Who Sold the World or its glam-rockin' creator during David Bowie's early years. "I enjoyed his music in the Seventies but was not an avid fan," admits the artistic director of Andrea Ariel Dance Theatre. But with a husband who is, in her words, "a big Bowie fan" and after an encounter with local Bowie tribute band the Super Creeps, Ariel has come around: "I am completely fascinated with him and his music now." Indeed, she's built an entire production around the shape-shifting superstar. The Bowie Project: A Rock & Roll Soundpainting blends the rocker's original songs with riffs on them (some composed, some improvised), text, and the unique performance form called Soundpainting – in which a kind of human orchestra variously makes sounds, projects emotional states, and delivers dialogue based on the specific hand signals of a conductor.

Walter Thompson, who developed the form about the time Bowie began taking off his Ziggy Stardust glitter, introduced it to Austin in the Nineties and found local artists who eagerly embraced it. Ariel, chief among them, began traveling to New York to keep working with Thompson. It was Ariel's husband, Colin Lowry, who had the idea of combining Soundpainting with a cover band, and when that idea dovetailed with the gig by the Super Creeps and the release of Peter Doggett's Bowie bio The Man Who Sold the World, Ariel saw a show in which Bowie's career could be a vehicle for understanding who we are, even as we undergo ch-ch-ch-changes.

"We are using his story and progression of personae as a container to explore identity," Ariel says. "We begin in the time when [the albums] Station to Station and Low came out – 1976 and 1977 – with an overture that Adam Sultan created within the container of [the song] "Station to Station" and land first in "Sound and Vision," in a time when Bowie was searching for his muse. The show travels back through time to 1969 and Space Oddity on a journey to explore the 'why' of his constant changes of personae."

Sultan, a member of the Super Creeps, is one of 12 performers who comprise the Soundpainting orchestra for The Bowie Project: six musicians, including Sultan's fellow band members and guitarist-Soundpainter Rolf Sturm from New York; two actors, Leese Walker and Nolan Kennedy from the NYC-based Strike Anywhere Performance Ensemble; and three dancers from AADT, Steve Ochoa, Alyson Dolan, and Ariel herself. Ariel, Sturm, and Walker will also conduct.

The show is not the pure Soundpainting experience as it was seen in local performances 12 or 15 years ago. "We are pushing and evolving the language in new ways with this show," says Ariel. "The whole show is not Soundpainted. There are times when audiences will hear a whole song, and others where we are remixing and deconstructing the music in a live conducted composition. We have created dancer and actor 'palettes' – choreographed movement and written text – that are developed from our research and tie into the songs we are using. So there is a thread that connects the songs to what was going on in Bowie's life – and the world – at the time of each song. Also, we have times when there are two conductors: one person conducting music and one conducting the dance and theatre. There is more interrelationship between the music, the theatre, and dance – as we are all exploring the theme of identity through Bowie's music and story. It is very much based in the music – and the dance and written material are tied thematically to each song – which connects us all. Together, we are David Bowie – many facets about him and all the various personae are present through each of us."

When Ariel suggests that Bowie's changing personae work as a metaphor for us all, she isn't just blowing smoke. She sees her dance company as being in the midst of such a transformation. "I am interested in doing something fresh and innovative and breaking out of what people expect from me," she says. "This project is a hybrid experiment that aims to appeal not only to dance and theatre patrons but also to music audiences and Bowie fans. It is truly a live music concert with dance and theatre. I hope people who don't usually come out to see my work will come check this out. In a way, it is a new identity for AADT."

The Bowie Project: A Rock & Roll Soundpainting
This music/dance/theatre collaboration wove together David Bowie's work with his life and the lives of others