Now we're in the midst of PrintAustin, the citywide celebration of printmaking, with so many different venues, demonstrations, artist talks, and tours taking place over January and February, it's all we can do to include as many as our listings will hold. I went over to Big Medium's Canopy compound, because "The Contemporary Print" (juried by Francesca Consagra, Katherine Brimberry, and Jeffrey Dell) is there, as is Art.Science.Gallery.'s "Impressi" and Immediatag's "Outlaw Printmakers." And, O holy Gutenberg, the level of diverse professional work evidenced in those venues bodes well for the many prints, contemporary and historical, concurrently on display elsewhere.

Hard to tear your vision from Samantha Parker Salazar's wall-sized Fluidensity: System Breakdown (1), a painstakingly arranged conflagration of cut paper, engraving, monotype, drawing, and painting that's such a bright cynosure on Big Medium's south wall. But when you do look away, you're rewarded with such wonders as Veronica Ceci's Augmented Realities, another wall-sized installation, but this one of relief monotypes quilting a two-dimensional vision of what reality's starting to look like through Google Glass and other such tech-enhanced filters; as Teresa Gomez-Martorell's they will come from the shadows, an eerie, accordioned extension of silkscreen, photoetching, and embroidery on Okawara paper, an artist's book that provokes narrative that David Lynch might whisper to you if his eyes were stitched shut with silk thread; as Totem II (Han), Ryan O'Malley's combination of laser-cut stencil and screenprinting that forms a freaky portrait.

Next door at Art.Science.Gallery., among a wealth of science-oriented prints, Jenn Schmitt's Periodic Table Printmaking Project draws the most interest. In this collection of 118 prints, 97 artists have used a wide variety of mediums – woodcut, linocut, monotype, etching, lithograph, and more – to depict the periodic table of elements. These tight ranks of small works, filling one wall, are an exhibition in themselves; but don't miss Ele Willoughby's thermochromatic linocuts (in which sections of the ink, when heated, disappear; which makes the Schrödinger's Cat print, in particular, a hoot) and, looming overhead, the life-sized gyotaku print of a full-grown turkey vulture by Adam Cohen and Ben Labay of Inked Animal.

In Immediatag, you'll find walls complicated by work from the "Outlaw Printmakers": woodcuts by Tom Huck, screenprints by the Amazing Hancock Brothers, unsettling tableaux from the mind and press of Julia Curran, and further pigment-based explorations by Ryan O'Malley, among other eye-grabbers. Beyond whatever's gracing the sound system, the inner ear gets busy trying to conjure the psychobilly music that these prints would illustrate the album covers of. Still, what remains foremost in my mind days later are two smaller prints by Artemio Rodriguez – such deep crisp blacks against the white, such diabolical revelry – although I'm possibly biased by the memory of the artist's enormous linocut prints at Slugfest.

But then, if you've got to have some bias to your thoughts, how much better when it's the influence of such resonant and vital handiwork as what's displayed in these three PrintAustin shows at Canopy. 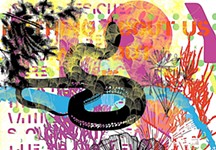