On Writers and Con Men

When James Magnuson graduated from the University of Wisconsin in 1964, there was one job he wanted more than any other. And it's not what you might think.

This may seem like a far cry from Magnuson's current job as director of the University of Texas Michener Center for Writers, until you realize that he has devoted the past 20 years of his life to creating a community of support and guidance for young people pursuing the monkish vocation of writer. Sitting at the helm of one of the most competitive MFA programs in the country, he has worked alongside such distinguished visiting writers as Denis Johnson, W.S. Merwin, and J.M. Coetzee to foster the talents of award-winning authors, including novelists Philipp Meyer and Kevin Powers, playwright Kirk Lynn, and poet Carrie Fountain.

Above all, however, Magnuson is a writer, and his most recent book, Famous Writers I Have Known (Norton, $25.95), with its coy, memoirish title, looks like just the sort of tell-all that the longtime director of a well-known writing program might drop a couple of years into a comfortable retirement.

But Magnuson is very much not retired, and Famous Writers is not a memoir, but a gently satirical novel written from the point of view of a small-time con man named Frankie Abandonato, who finds himself mistaken for a visiting professor at the Fiction Institute of Texas, a thinly veiled stand-in for the MCW. On the run from criminal thugs, the wise-cracking Frankie takes a page out of the Some Like It Hot playbook and hides out in the rarefied atmosphere of the MFA creative writing program, embracing his new identity as V.S. Mohle, a Salinger-like recluse whose claim to fame is a countercultural novel titled Eat Your Wheaties.

"All writers are impostors," Magnuson says, explaining the inspiration for his story. "Writers and con men share a lot, particularly in being masterful liars."

Seen through Frankie's eyes, the MFA program is a chaos of clashing egos and classroom flirtation from which creative miracles nonetheless emerge with mysterious regularity. But by far the juiciest character of all is the one based on James A. Michener: Rex Schoeninger, an aging writer of bestselling historical fiction whose massive endowment funds the Fiction Institute. As Frankie begins to patch up, by proxy, a longstanding and bitter feud between Mohle and Schoeninger, he discovers an ailing, irascible, but surprisingly vulnerable man surrounded by supplicants to his vast fortune.

Michener came to Austin in the early Eighties to research his sweeping epic, Texas. "He asked if he could sit in on some classes, and I said sure," Magnuson remembers. "The kids all loved him." In 1988, he granted the university $1 million to start a small graduate program for writers; the next year saw him add another $3 million to the program's coffers, and in 1992, his gift of $15 million made the program one of the best funded creative writing programs in the country, with the largest endowment. After Michener's death in 1997, the name of the writing program was changed to the Michener Center for Writers in his honor. Magnuson, whose career got an early boost from a prestigious Hodder Fellowship for Playwriting at Princeton University, relishes the ability to pass that advantage on to younger writers, thanks to Michener's generosity.

But though his legacy to the writing world is undeniable, Michener himself was riddled with insecurities over his critical reputation, which never achieved high literary status despite his popularity. Says Magnuson: "He always used to say, 'I'm not trying to be a literary writer, I'm another kind of writer.' But I got the sense that it still rankled." While the literary feud between Mohle and Schoeninger in Famous Writers I Have Known is entirely fabricated, Michener did famously win the 1948 Pulitzer Prize for his novel Tales of the South Pacific over the promising young gay writer John Horne Burns, whose career never recovered. Burns later savaged Michener in reviews, calling his prose "brilliant high-school stuff"; after his own next book was panned, Burns eventually drank himself to death. In his memoir, Michener wrote that he thought often about Burns' sad decline, though he stopped short of blaming himself. "People don't know how complex and interesting he was, and how deserving of respect," says Magnuson. "He gets pushed aside. Those people who attack him, I think, you don't get it – and those people who think he's Flaubert, well that's not true either."

Michener, he says, reminded him intensely of his father. "My father was almost the same age. He was very moral, irritable – and, in a small sense, very tight with a penny, a Depression kid." Magnuson describes walking down the street with Michener and seeing an Arby's coupon lying on the sidewalk. "He stabbed it with the end of his cane and said, 'James, we're going to lunch!' I find that kind of adorable, because it just reminds me of my father. I don't hold that against him at all."

Moreover, Michener was extremely generous in larger ways, searching out charitable routes to dispense of his large fortune toward the end of his life. This unfortunately led to him being plagued with constant requests, and, despite the vigilance of his gatekeepers, he became increasingly guarded. "He said to me, 'At some point in every conversation, I just wait and wonder how long it'll be before they ask me for money,'" says Magnuson, who saw examples of this firsthand. Sharing the initials "JM" with Michener, he occasionally received Michener's mail by mistake after his death and was shocked by the volume of the requests.

In the book, Frankie, who is, like Schoeninger (and the real-life Michener), an orphan, comes to feel an intense bond with the elderly man, warts and all. The novel, which is written as Frankie's tribute to his time with Schoeninger, is, in a very real sense, Magnuson's tribute to Michener, whom he calls "a great man."

Magnuson started writing for the first time as a freshman at the University of Wisconsin in Madison, when a professor singled one of his essays out as an example of excellent student writing. That stroked his ego, he says self-deprecatingly, and he began to apply himself. After graduating from Wisconsin, he began writing short plays and putting them on in churches and theatres in East Harlem, and he eventually won the Hodder Fellowship. His long and diverse writing career has included nine novels; a dozen plays, one of which was recently revived at the Lincoln Center; and a brief stint in Los Angeles writing for the television show Knots Landing ("I didn't know what it was about, I read about the characters in People magazine on the plane on the way out there," he confesses).

It's not surprising that he's gotten to know plenty of famous writers along the way. But he's not naming names.

"That would ruin the game," he says, adding, "I can't deny there's an element of setting out to deliberately cause mischief." Moreover, he says, his 50-year writing career has given him enough material to cherry-pick the details, mixing them up beyond immediate recognition. "The obvious ones are Buckley and Mailer and Vidal and those guys. J.D. Salinger, Pynchon ... but," he says, grinning, "there are lots of others who are lesser lights who have gotten my goat at one point or another."

And what of the character based on himself? Frankie describes Wayne Furlough, the director of the Fiction Institute of Texas, as a bit of a buffoon, "a fleshy man with glasses and prematurely white hair and beard" who wears Hawaiian shirts and dreams of abandoning his responsibilities for a shack in Montana where he can be alone with his muse.

"I thought it was only fair. I've got to go after myself if I'm going to go after anybody else." The joke, Magnuson says, hides some truth in it, and perhaps the shack beckons from time to time. But Magnuson isn't complaining. "His life has not been as happy as mine has, and it's not been very lucky. I've had luck a few times in my life."

One such stroke of luck was his accidental meeting with a Princeton professor of African religion at a wedding in the Catskills in the mid-Sixties. As Magnuson describes in an essay called "The Hat Will Be Passed," that professor told him about the Hodder Fellowship and encouraged him to apply, effectively giving him his start as a writer.

Reading that essay, one thinks of the cover of Famous Writers I Have Known, which features a giant white cowboy hat. With only a glimpse of unidentifiable bushy white eyebrows and spectacles peeking out from under the brim, it's easy to speculate on whether it is Michener or Magnuson under that hat, and to wonder whose hat is being passed, and to whom. 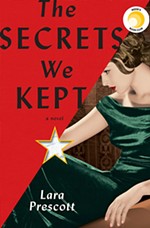 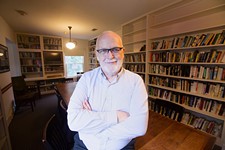