Ask Roy Janik what it takes to be an "all-star" in his book, and you learn quickly that he doesn't toss that term around lightly. "It's not just a matter of being the best performer," says the Hideout Theatre artistic director. "An all-star is at the top of his or her game. But [is] also confident, casual, and completely in control. Like the original Olympic Dream Team, the Three Musketeers, or Robin Hood and his merry men: absolute badasses with a basketball/sword/bow, but joking and leaping around while in action, and having a grand old time along the way."

The topic's been raised because the latest addition to the Hideout schedule, The Big Bash, is billed as "all-star improv," and I'm curious as to just what that means. "The great thing about the Austin scene is that there are so many different styles of improv flourishing here. And for each style, there are different people who are better suited for it," Janik continues. "But the players that really stand out to me are the ones that have a kind of electric personality. They're charismatic, watchable, and they're connected to the audience even when they're not interacting with them directly. In a very Zen-like way, people like that are 'present.' With The Big Bash, [we're trying] to select performers who are extremely experienced at playing improv games, sure, but who are also present, playful, and mischievous, and who will have fun trying a bunch of different things out onstage."

In bringing together improvisers with that kind of attitude and level of experience, Janik and Big Bash co-director Andy Crouch hope to create a show that's "professional and accessible," with perhaps more "polish" than the usual fare. "We want The Big Bash to be a 'sure bet,'" says Janik, "something that you 'have to do' when you come to Austin." Which should not be equated with playing it safe, Janik insists. "The goal is to take everything up a notch. If we have a certain base level of mastery of the games and forms, then we're really free to mess with them. Break the rules, reach further, and do it all with a glad heart."

That was the case right out of the gate in the December test drive for The Big Bash, which boasted a seasonal theme. In the very first show, says Janik, "Aaron Saenz kept taking the holiday scenes to twisted places. So I, as the host, started admonishing him mid-scene for going too dark. Which only made him go darker, of course. The real joy of the show comes from messing with each other." The format, with a host (usually Janik or Crouch) directing a cast of four improvisers and a musician, first in a series of games, then an improvised longform story, has proven itself "a good template for the future," i.e., the show's weekly slot in 2014.

Better yet, Janik adds, has been the audiences, which have been large, enthusiastic, and "mostly made up of newcomers to the theatre ... which is exactly what we wanted. Our goal with the show is that it'll be the perfect choice not only for fans of improv but also for tourists or people new to improv or to Austin, and a good 'first show' to recommend to your uninitiated friends."

The next test is this week's Big Bash New Year's Eve Improv Extravaganza, with Janik, Crouch, Kareem Badr, Kaci Beeler, Troy Miller, and pianist Ammon Taylor reviewing the year that was in "a more extravagant, bigger, more Champagne-filled version" of the show. (Actually, that'll be Champagne-filled for the 10:30pm performance Tuesday; the 8pm show will be filled with complimentary chocolates.)

Then, on Jan. 3, The Big Bash takes up its 8pm Friday residence – which Janik sees as a payoff a long time coming. "After 15 years of providing improv entertainment and training to Austin, we knew we were capable of something even bigger and better that showcased some of our best performers and our favorite philosophies. Something special, that was simultaneously polished and risky, that combined well-executed games with improvised storytelling, that gave us a chance to cut loose and play.

"That show is The Big Bash." 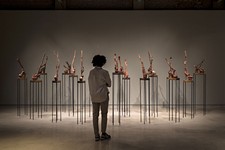 Seen / Soon: Dec. 22
Getting down to earth with Wangechi Mutu's solo show and easing into New Year's with a Hideout improv sampler