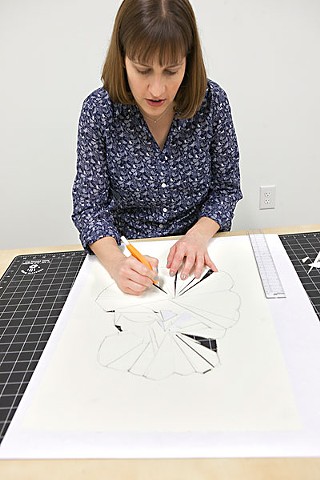 Studio spaces in Austin are often visual indexes of the dozens of artists who have worked there over time. Paint marks every surface from ceiling to floor, walls are pock-marked with holes from nails and tacks – "character" accretes. Rarely, then, does an artist get the opportunity to move into a newly built space. Yet this is precisely the situation for painter Rebecca Rothfus, who is among the first occupants of Big Medium's studio complex, Canopy. "For me, it was perfect because my artwork has always been clean and neat, and so it was fitting," says Rothfus. "There is a door you can close. There are clean walls. It's a controlled environment, and that's fantastic for me." That control shows up in Rothfus' cutouts and drawings on paper – crystalline landscapes in rolling, vibrant hues. The artist, who teaches art to kids part time, is demure regarding her skill at making cutouts, yet in a few short cuts of the X-Acto knife, Rothfus creates stunning three-dimensional images.

Rebecca Rothfus: Prior to being in this space, I was in my house, which was great; I could walk around, do laundry, and make art. But also I got lost in the mix of the art community; I felt isolated. When I heard through a friend that Big Medium was creating the space, I went on one of the site visits – when Canopy wasn't yet built. It was studs and construction workers. We had to wear hard hats. Shea [Little] answered all our questions – talk about visual people trying to communicate! I decided at that moment I wanted to be a part of the community. Especially seeing the people who were involved, people who were serious about their artwork and also a sense of community. Immediately when I moved into the space, people started to have studio visits with one another. We had a little tour, popping into each studio as a group. There's a lunch group ....

Austin Chronicle: So it's become a real self-sustaining community?

RR: Yes. Definitely. Even during EAST [the East Austin Studio Tour], other artists in Canopy were walking around giving compliments. It's not a competitive space.

AC: Do you think that's because there are so many of you who have studios in Canopy – it's not just, say, five of you, competing for the same set of resources?

RR: That makes sense. And such a variety: Some make prints; others make crafts.

AC: How has this new space influenced your work?

RR: Well, there's more of it! But I think the relationship to other artists here really makes it more of a place for experimentation. With a swing of a door, I can be open for feedback or be closed off, and I like that option.

RR: You can talk to my rock collection if you want!

AC: Whisper sweet things to it!

RR: You know who really likes the mineral collection? Kids, grown men, and hippie ladies! It's also important for me to have past work up. These works influence me and remind me of where I've been. Even if I'm changing, it's a nice reminder of "Hey, remember? You're capable of this, too!" It was interesting: During EAST, some people would come into my studio and ask if there were two artists in the space, because my older work looks somewhat different. But some people would come in and connect the dots. It was like an experiment.

See our photo gallery of Rebecca Rothfus' studio. More of the artist's work can be found at www.rebeccarothfus.com. Studio Practice
Canopy tenants love the Eastside art studio complex, even if they're not from the Eastside ... or artists