A Way Back to Tenderness

Your glasses are on your head.

Your keys are in your other pants.

The mayonnaise is in the refrigerator door.

My fear is waiting on the bedside table.

– "A Marriage," by Stephanie Peco

Stephanie Peco first saw Keith in Port Aransas in 1978. He was holding a tray in a cafeteria at the University of Texas Marine Science Institute, where he was getting a marine biology degree. Even though she was with her boyfriend of the time, she couldn't help checking him out. "He was striking," she says with a laugh. A year later they were dating. For six years they lived together ("Very scandalous for the time," she says) while Keith, who worked at NASA for a time, got a second degree in electrical engineering; they moved to Houston, then Boston, then finally to Austin, where they got married and have lived ever since. Their 30th anniversary is fast approaching.

Although the news was painful, for Stephanie, it came as more of a relief than a shock. Despite Keith's efforts to hide his memory loss and strange behavior, she had known for years there was something wrong. After being laid off from his long-term tech job, he had held a succession of short-lived jobs – consulting, substitute teaching, even working for the IRS – and lost them all. "One day at work, he found himself with his fingers on the keyboard, just staring at it, and he literally didn't know what came next." After a lifetime of always finishing assignments first and waiting for others to catch up, Keith found himself in a perpetual limbo, the script for living having vanished right before his eyes. So, in a way, had Stephanie's. There is no script for becoming your spouse's primary caregiver.

But there is always poetry. In a series of writing workshops that culminated this winter, Badgerdog, a program of the Austin Public Library Friends Foundation, teamed with the Mobile Art Program and Health's Angels, a service group of St. David's Foundation Community Fund, to help Austin residents like Stephanie and Keith Peco cope with one of the most common predicaments faced by aging couples.

Using writing prompts and poems as models, instructors Cara Zimmer and Terri Schexnayder encouraged caregivers to begin expressing themselves. Care recipients worked with artists at Mobile Art to create self-portraits, collages, sculptures, and ceramics to express their own feelings. Badgerdog published the caregivers' writing alongside the art created by their loved ones in an anthology called When I Bloom. Its pages speak of heartbreaking moments in the present as well as glimmers of connection and reconnection to the past. The workshop culminated in a reading event at Mercury Hall.

Many in Austin don't realize just how common the Pecos' situation is. Stephanie and Keith Peco are part of a population that has grown 110% in Austin over the past 10 years. Call it Austin's pre-senior boom: We have the fastest-growing population of 55- to 64-year-olds in the nation. "Austin perceives itself as very young, but we see this growing background of an aging population," says Michael Wilson, program officer for healthy aging at the St. David's Foundation. This summer, Mayor Lee Leffingwell's Task Force on Aging put out its first report, with recommendations for improving social and economic conditions for Austin's older adults.

Health care is an ongoing need of this population, but many don't realize that annually, $450 billion worth of care is supplied at home by family caregivers, 90% of whom are spouses. This is a situation that compounds itself quickly, since so many caregivers are themselves older adults, and caregiving can result in health strains that increase mortality risks for caregivers by 63%, according to one 1999 study.

Faith Unger is the program coordinator for CaregiverU, a group that offers resources and support to families providing elder care. She is also, herself, a spousal caregiver. She sums up the situation this way: "Anything we can do to support family caregivers, we should be doing. If they aren't able to provide that care, someone else is going to have to. And it's going to cost a lot."

Writing may prove one of the most cost-effective means of providing that support. Researchers have long touted the benefits of journaling for cognitive and psychological health. Wilson explains: "If you think about what you have to do, you've got the fine motor skills of either typing or picking up a pen or pencil, and then there's the organizational work that has to take place within the brain, and there's the picking the right word and creating the right description. Writing is a very cognitively intensive process. The more you write, the more you use your brain; the more you use it, the better it works; the better it works, the longer it will continue to be intact. It's one aspect of a lot that go into maintaining cognitive strength, plasticity, and well-being."

There is also a hefty psychological benefit to writing. "People engaging in writing feel better connected," says Wilson. "They are less likely to experience the onset of depression, and if they are in depression, writing and journaling can blunt the effects. It can make people feel more connected even when they are in isolation."

Moreover, the therapeutic benefits of writing can transcend even verbal storytelling, which has long been acknowledged as a way of helping patients cope psychologically with illness. Zimmer, a writing instructor at Badgerdog for four years who is now pursuing a master's degree in education from Columbia University, explains it this way: "In speaking, you already know what you're going to say; in writing you don't know what's there, and then all of a sudden you get there, and that's kind of the relief."

But does all that translate to better physical health? Research suggests that it does. The high incidence of chronic, unhealed wounds in older adults suggest that as the body ages, the body's ability to heal itself deteriorates. A recent study at the University of Auckland found that daily expressive writing – that is, writing about emotions and upsetting life events rather than daily tasks and activities – correlated with faster wound healing in healthy adults ages 64 to 97. The writing study corroborates other research showing that reducing the negative impact of stress on the body through positive affect and relaxation techniques can improve the body's ability to heal itself.

Whether and how workshops like Badgerdog's "When I Bloom" series can improve the physical health and longevity of aging caregivers, and, by extension, of their ailing loved ones, is, of course, difficult to say. For both Stephanie and Keith, however, the therapeutic benefits have been obvious. Stephanie wrote poems in high school "because everyone writes poems in high school," but never pursued writing as an adult; she initially signed up for the workshop because it was something for Keith to do. When she sat down to write, however, she discovered a well of emotions, images, and memories she hadn't realized were there. Ten minutes later, she had written her first poem: "A Marriage." "It just came out of me, all at once, like it was already written." Keith, too, has become inspired; a lifelong artistic dabbler, he is now pursuing his art in earnest.

Cecily Sailer, Badgerdog workshop programmer, says that the APLFF hopes to offer more of the caregiver/care recipient workshops in 2014.

Stephanie, for one, would go back in a heartbeat. After the diagnosis, she says, her relationship with her husband of 29 years turned into a series of appointments, meetings, plans, practical steps. Staring into the future and seeing only a decades-long to-do list, Stephanie was overwhelmed, and her sense of connection with her husband dulled.

But in writing a poem called "The First Time I Saw You," Stephanie returned to that moment in the cafeteria when she glimpsed Keith holding his cafeteria tray – "so tan you seemed lit from inside."

Fighting back tears, she says, "It was a way back to tenderness."

For information on how to help support Badgerdog programming, contact Cecily Sailer at 512/542-0076 or csailer@austinlibrary.org. To find out more about CaregiverU, contact Faith Unger at 512/600-9279 or funger@ageofcentraltx.org. The full text of Stephanie Peco's poem is available here. 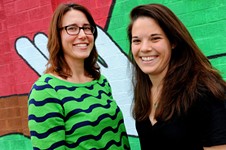 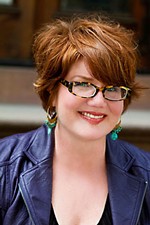