A painted, wooden world worth steeping in: The Nutcracker attacks the rats. (Photo courtesy of Tony Spielberg)


Playful without being cartoonish, traditional yet fresh, Holly Highfill's breathtaking new set designs rendered Ballet Austin's The Nutcracker a live picture book of the kind you want to dive into. The Staulbaums' living room, in yellows, pale greens, and rose, was period-perfect and warm. When the tree grew to reveal the world beneath the boughs, where the battle scene takes place, the loudest crash of the cymbals and brassiest brass brought the entrance of two mammoth-sized, primary-colored, wooden pull-toys that towered over the soldiers and rodents. What a thrill!

The battle scene, which often plods along at a tin soldier's pace, flew by too quickly for me on Saturday evening: I wanted more time to steep in that painted, wooden world, and also to marvel at the new, richly textured, jewel-toned costumes by Judanna Lynn, the crowning brilliance of which was the weapon wielded by the Rat King. He sought to slay the Nutcracker not with the requisite sword but with a gleaming, oversize butter knife – which had both my 7-year-old daughter and me giggling with delight.

After the battle, a few wooden trees begat a forest of white worthy of Robert Frost's snowy woods: deep, dizzying, enthralling. Against it, the corps of snowflakes costumed in skirts of a perfect drape – the layers reminiscent of the tiered skirts in the party – animated the scene, amidst glistening snowfall and Tony Tucci's magic-hour violet light. Act II's scenery, in layers of pinks and purples – perhaps the colors of candies of bygone days – was at the same time scrumptious and too lovely to eat. Layers of flowery confections bordered a backdrop that glowed in various hues, and with each divertissement, a new sweet or ornament was lowered in, adding layer upon layer to the gorgeous scenario, the stuff of sugarplum dreams.

And the dancing? The entire cast fared well, many at their best, clearly galvanized by their garments and surroundings.

Yet with any art experience, what is presented to you collides with what you bring with you. Or whom. I think that a companion of the age of 7, positioned on the precipice between fantasy and reason, is ideal for this ballet. Though my daughter usually eschews rhinestones and tulle, she allowed herself a whispered adoration of the Snow Queen and King in glittering, midnight blue. But she also asked questions of logic. Why, after the battle scene, did angels appear? I was stumped; they don't contribute to the plot. "For magic," I supposed. She accepted this, but as the little gold-skirted girls scurried around Clara, I realized I was quite wrong. The angels are there because that's the point in the score when the harp enters, gliding over the soaring strings. 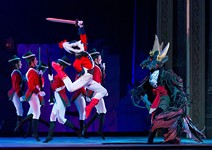