My Fair Zombie: Chris Montalvo and Allie Donnelly on the run from a friend who wants them for dinner

'Tis the season when much attention is given to what is born – the Son of Heaven, on Earth as man; the sun in heaven, returning with spring – but I didn't expect this year's births to include singing and dancing zombies.

Of course, really, who does expect singing and dancing zombies, at any time of year? In this instance, perhaps only their creators: playwright Greg Kotis and composer Mark Hollmann, whose names may ring a bell thanks to a keen little show they made a dozen years ago, Urinetown: The Musical. In the time since that satirical sensation snagged three Tony Awards (Best Original Score, Best Book of a Musical, and Best Direction of a Musical for University of Texas alum John Rando), it has become a favorite on the college and high school theatre circuits and its writers have gone on to celebrate in song and drama the origin of life on the ocean floor (Yeast Nation [the triumph of life]) and the making of a one-man musical vehicle for Bush 43 Attorney General John Ashcroft (Eat the Taste). Once you've carved out niches in the American musical theatre for those topics, what's left to tackle but the living dead?

In truth, the team had been approached about writing a musical history of the hamburger for a theatre company that, Kotis says, hoped such a work would draw backing from the fast-food industry. Kotis responded with a fast-food-related musical idea that he and Hollmann had pitched for a movie: A chain called Chicken Hutt has created a new sandwich that, unfortunately, turns those who eat it into the shambling, brain-craving undead. While Kotis openly admitted that the show wouldn't inspire anyone in the industry to throw money at it, True Love Productions went ahead and commissioned Kotis and Hollmann to write it.

Earlier this year, the pair was able to spend some serious time on what is at this stage just called Untitled Zombie Musical through a residency at Goodspeed Musicals' new Johnny Mercer Writers Colony. Then the UT Department of Theatre & Dance provided a second major shot at developing the show, workshopping material with students in its musical theatre program. All this past semester, the team sent scenes and songs to faculty members Natasha Davison (choreography and direction) and Lyn Koenning (music direction), who, with assistance from grad student director Steven Wilson (The Beautiful People, The Scarlet Letter), guided a class of 26 undergrads in getting Hollmann and Kotis' zombies on their lifeless, shuffling feet. The plan was for the writers – joined by director Sean Daniels – to convene in Austin at semester's end, view the students' work, and make adjustments before a workshop presentation. The team flew in just ahead of last week's blue norther, observed the students, and, in about 30 hours, hammered out enough new material to complete a full draft of the show. That included the ending (or, more appropriately, an ending) and a song finished so close to the 6:30pm showtime that it wasn't copied out for the students to perform; Hollmann himself commandeered the piano to sing it.

That gets to the heart of what was so remarkable about the presentation, which I was fortunate enough to be invited to: a show was being born. And by that, I don't mean the next Broadway hit for Hollmann and Kotis. I don't even mean the next musical comedy funny enough to justify the gouge out of your wallet that buying a ticket will leave. I just mean a show. Forget about the creators being the monster talents behind Urinetown. Forget about the workshopping agent being the monster institution on the 40 Acres. For that matter, forget about the singing and dancing zombies. (OK, I'll grant you, it's hard to forget about singing and dancing zombies.) Just picture any couple of writers who have been laboring over a theatrical notion, coaxing it out of their heads and onto the page in fits and starts for months. They're not sure what they have. They don't know what parts rise from the stage and sing, and what parts just lie there, stiff and still. They don't know if it all hangs together. For the love of Pete, they only just slapped on an ending a few hours ago. So there they are, in this meager little classroom playing-space far from their homes, no sets, no costumes, no fancy lights, no pro actors, no orchestra, just a rehearsal piano and some students with conviction, and these writers hear their words and music break the air in complete form, beginning to end, for the first time. This is the very first time their baby is more than just scenes and songs; it is a show. That's a thrilling moment in the life of a creative project, no matter who the originators are. It's an idea made whole, manifesting in the world, its presence owed to a group of artists working together. Not to draw too much of a parallel between this and another birth in humble surroundings much mentioned this time of year, but to me there's something of the miraculous at work here, too.

Telling you much about the show I saw wouldn't be fair – part of the reason for developing a play so far from New York is to get away from the scrutiny that journo types like me provide – but I'll allow that I liked it a lot, and I fully expect it to have changed, maybe a lot, when next I see it. Oh, and those UT students showed such heart. They pumped as much life into the undead as you could hope for, and made this debut of a zombie musical a birth worth remembering. 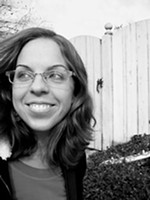