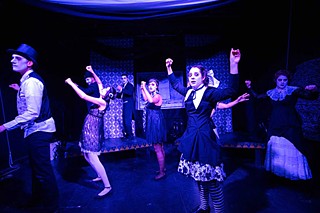 Glam gloom: The cast of A Bedtime Gorey (Courtesy of Warren Henderson)


Call it a celebration, call it an homage, call it extemporaneous fan fiction: The Hideout Theatre is presenting a show called A Bedtime Gorey, and the improvisers involved are making with the whimsical and creepy in the style of that late, lamented creator, the raccoon-coat-wearing fellow whose macabre tales and distinctive drawings were popular long before they were animated for the opening of PBS' Mystery.

Staging antics based on fictional constructs with a huge and (let's never forget this companion adjective) rabid fan base is not unheard of, especially in the improv community of Austin, Texas. There's Doctor Who improv, Firefly improv, World of Warcraft improv, Star Trek improv, Sherlock Holmes improv, Harry Potter improv – hell, Gnap! Theater Projects even tried its clever hands and foul mouths at a sort of Deadwood improv.

And how does this Bedtime Gorey comport itself?

As a party, appropriately enough.

The show isn't formatted as one extended narrative of mischievous misery and giggleworthy woe, but a soirée at which the players are the grown-ups gathering for elegant merriment "upstairs" and the audience are the children herded "downstairs" to a cellar to be watched over by a creepy, slightly doddering old butler. Scenes shift from upstairs, where the grown-ups are tippling and engaging in badinage you'd expect among upper-class characters by Gorey, to downstairs, where the grouchy servant spins odd tales to occupy his young charges' attention.

The upstairs scenes tend to be more effectively entertaining, as "grown-ups tippling and engaging in badinage" describes most improvisers in their offstage hours anyway, and the players here (Kaci Beeler, Aaron Saenz, Ruby Willmann, and Jason Vines, among others in the talented cadre) are only having to channel their more poshly sinister selves to make the gambit succeed. And it does succeed as the characters regale the room with their bold adventures and proclivities and play a few "parlor games" for their own delight. The audience, too, is frequently delighted, as these veteran improvisers, directed by Parallelogramophonograph's Valerie Ward, are not only clever but also skilled in group dynamics, letting others take the lead where necessary and helping one another move the scattershot risqué and murder-riddled conversations to further hilarity.

The downstairs portion doesn't fare quite as well. While the discomfited butler – ably embodied by omnipresent improviser Andreas Fabis – relays his tales of doom and gloom, players behind a scrim enact them in shadow-play, often with a glaring disconnect between the description and the actions portrayed. This is precisely, at times, what's so funny, but also, at other times, what seems like only another unfortunate miscalibration: We want a smoother meshing of gears, as would befit the beauty of the shadow-work itself. "Visually, those sequences were lovely," my spouse declared. (Note: Picture the jaw-droppingly gorgeous "Deathly Hallows" sequence from that Harry Potter movie done, for better and worse, by South Park.)

Still, upstairs, downstairs, the division works to provide a parallax view into an upper-crust world both morbid and lively that – along with the perfect makeup, costumes, and minimalist monochrome set – will likely please die-hard and casual Gorey fans alike.