Remembering the founder of the Serie Project and Austin printmaking legend Austin has lost perhaps its greatest missionary for the art of printmaking. Sam Coronado, who founded the Serie Project and ran the nonprofit screenprinting program for 20 years, allowing scores of artists the opportunity to make prints with his studio space, materials, and guidance, died Nov. 11 following a stroke while on a trip to Indiana to speak at the Fort Wayne Museum of Art. That he was there to talk about the exhibit "Graphicanos: Contemporary Latino Prints From the Serie Project" illustrates how much a part of his life was devoted to the art of the print.

The Ennis, Texas, native knew by age 9 that he wanted to be an artist, and he worked his way up from paint-by-number sets to watercolors to acrylics. Following three years in the Army in the mid-Sixties, Coronado began studying art in earnest, first technical illustration at El Centro Community College in Dallas, then fine art at the University of Texas at Austin, where he co-founded the Chicano Art Students Association. For Coronado, art and activism walked hand in hand. In Houston, he launched Arco Iris, an organization to promote Mexican-American art, and here he joined artists Sylvia Orozco and Pio Pulido in establishing a small warehouse space to showcase work by Latino artists that evolved into Mexic-Arte Museum.

Coronado was interested in printmaking before 1990, but a visit to Self-Help Graphics in Los Angeles that year really stoked his passion for the medium. The next year, he opened his own print shop, Coronado Studio, and then founded the Serie Project, which just celebrated its 20th year with retrospectives at Mexic-Arte and 2911 Medical Arts Street #13 (the latter open through Nov. 30). Some 250 artists from across from the United States and Latin America have made prints through the project, a testament to Coronado's vision, persistence, and generosity. Coronado was revered for his commitment to inspiring and instructing others, whether they were artists in the Serie Project or his students at Austin Community College, where he'd been teaching since 1986.

In recent years, Coronado had received some notable recognition – induction in the Austin Arts Hall of Fame, a Community Leadership Circle Award from UT-Austin, a Lifetime Achievement Award from the Austin Visual Arts Association, a Lifetime Achievement Award in Visual Arts from Mexic-Arte – but I don't think anyone was ready for the 67-year-old to hang up his screens. He still had so much to share with us – of his art, of his knowledge, of his generous and humble spirit.

Coronado is survived by his wife Jill Ramirez, daughter Sonia Christina Sorenson, grandchildren Victoria and Noah Sorenson, sister Yolanda and brother Ricky, and half-brothers Johnny and Santos Garcia. The family has asked that, in lieu of flowers, donations be made to the Serie Project to support Coronado's legacy. For more information, visit www.serieproject.org. 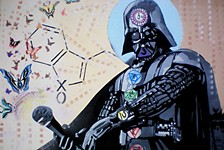 'Young Latino Artists 17: Grafficanos'
A Snapshot of one generation at street level