England's worst king, but he says he's gettin' it together: E. Jason Liebrecht as King John (Courtesy of Bret Brookshire)


Fixing King John is a theatrical experiment that careens through the evening at highway speed, barreling along through some approximation of the Shakespearean play. There are probably safer speeds at which to travel, but damn, that was fun. Kirk Lynn's adaptation, with direction from Madge Darlington, is loose and gangly in its treatment of the original work. To those at all familiar with Lynn's other writing or the work of several of the cast members, seeing this Rude Mechanicals production is a bit like going to a bar with the company and listening to them duke it out over some idea or theatrical position for the sheer love of the debate. The language of the script is reminiscent of verse, but it freely breaks from any kind of iambic guideline when the content needs a little more room.

The original King John is one of Shakespeare's lesser-known history plays, telling of King John who went to war with King Philip of France. A cardinal whom John has displeased maneuvers against him, using threats of excommunication to turn shaky allies into enemies. There is a lot of death.

Fixing King John also has a lot of death, and a lot of laughs, too. It mashes together several characters and mixes up a number of plot points, but all in the service of what winds up being a remarkably original play. The actors perform in the round and also from various spots in the audience, who sit on varying levels of platforms built for the show. (The program credits Thomas Graves and Darlington with the "Environment.") The costumes (designed by Olivia Warner) are essentially street clothes, with the odd sword or crown thrown in. The overall design is kept simple to allow the play and the actors to dominate.

Fixing King John features one of those strong ensemble performances (including Chronicle Arts Editor Robert Faires as the Bastard) in which you almost hate to cite one actor for good work over any others – but here, there's something about Barbara Chisholm's explosive passion and bloodlust as Constance that's irresistible. To hear Chisholm (who is married to Faires, by the way – small town, eh?) excoriate the male characters and urge them to battle is to get a full blast of womanly rage, lust, and power, and to share some of Chisholm's delight in blasting people with her impressive force.

Fixing King John also permits some moments of quiet thought. Even with the raucous fun of most of the play, these times when the actors are able to say something honest and unadorned are what make Fixing King John the sort of show that sticks with you, days later. It's a fiercely energetic production whose subtler moments give it meaning and beauty. 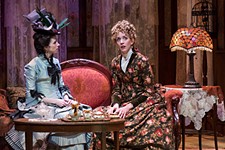