In his review of the 1993 film version of Much Ado About Nothing, John Simon writes, "No matter what they do, American actors will never equal British ones in Shakespeare, at the very least because they have not the right language." Though Harvard-educated and well aware of the linguistic research suggesting that Elizabethan English was closer to modern American speech than what's spoken in Britain today, Simon compares the Bard to Beethoven, calling both "time-travelers" who composed their works to be best articulated by instruments and voices not yet heard.

After witnessing the powerhouse performances by the Actors From the London Stage in their touring production of Othello, brought to Austin last week via a partnership between UT and the University of Notre Dame, I'm almost ashamed to admit that I agree with Simon. But was that because we so closely associate the Bard's work with British prosody or because these actors simply came to us with unparalleled training? No doubt Shakespeare melds seamlessly with history and poetry in the English primary classroom in a way that many American schoolchildren would find difficult to fathom. Beyond that, these five AFTLS actors have pedigrees from some of the best brands in world drama: RADA, the Royal Shakespeare Company, the Bristol Old Vic Theatre School.

Still, this grandiloquent quintet stomped into the first scene looking more like a modern motorcycle gang. Decked out in combat boots, jeans, and tight T-shirts, they wouldn't have looked out of place atop one of our many local construction cranes.

Inventive uses of a triangle, singing bowl, and bird whistle helped keep this traveling cast's load light, while making it a bit more than a staged reading. A rousing group rendition of the "Canakin Clink" pub song and two stellar a cappella musical performances by Alinka Wright as Desdemona and Richard Neale as Iago, gave audience members a much needed emotional release from the otherwise relentless ferocity of Iago's envy and Othello's pride. Jude Akuwudike pulled out all the stops as the Moor of Venice, spitting his grief into the floodlights like a cobra.

Certainly, Americans have mounted some wonderful productions of Othello, but ultimately the Brits are too invested not to dominate in the Shakespearean arena. Ironically, years ago I saw Rupert Graves in London, performing in American playwright David Rabe's Hurlyburly – its very name taken from a line from Macbeth, despite the play being set in the Hollywood Hills. Hearing a well-known British actor affect an American accent is usually a novel experience, and Graves did a swell job, although some might argue it's easier to swing in that direction than from our side of the Atlantic to theirs. I'm fairly certain we suffered less hearing the San Francisco Symphony Orchestra play the repertoire of Metallica than we would have the other way around. 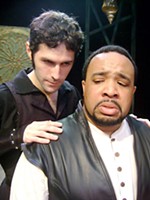 Othello
With a gripping turn by Andrew Bosworth, this City Theatre production of Shakespeare's tragedy belongs to Iago

More Actors From the London Stage 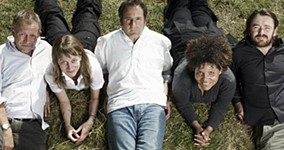 Actors From the London Stage
Something wondrous this way comes