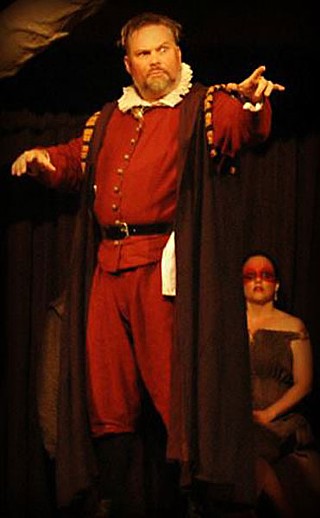 Dad gets even: Robert Stevens and Leanna Holmquist (Courtesy of Allen Childress)


Although stagings of most Shakespeare plays consistently draw crowds, audiences may be hesitant to take a chance on the Bard's less celebrated contemporary, Thomas Kyd. In this case, that would be a real shame as the production of Kyd's The Spanish Tragedie by the Baron's Men is an absolute joy to behold. Nestled in the woods and aglow with torchlight, productions at the Curtain Theatre on Richard Garriott's West Austin estate afford audiences the opportunity to experience Elizabethan drama with all five senses.

There really is something for everyone here. Academics will delight in tracing the origin of Shakespeare's Hamlet through this precursor, which also features a play within a play. Kyd's drama, like Shakespeare's, is a story of revenge – though in Kyd's, it's a father avenging the death of his son. Those who simply want to be entertained will find plenty of comic relief here. Most notable in this realm are the Viceroy of Portugal (well-played by Julio Mella, whose elastic expressions exhibit a remarkable range) and Ameer Mobarak's foppish but adorable Balthazar.

Mobarak calls to mind the iconic Sacha Baron Cohen as Borat starring in La Cage Aux Folles. In fact, a handful of celebrity doppelgängers are on hand here, including Casey Jones, who's channeling Johnny Depp as the hypnotic Don Andrea, and Gabe Diehl, whose Lorenzo embodies the intensity more than the actual visage of a young Willem Dafoe. Diehl's baritone is perfectly suited to speaking Kyd's words, and his cheekbones could cut through steel as if it were butter.

Even if the costuming wasn't as exquisitely beautiful as it is, Diehl and his fellow players Joanna Casey (Proserpine), Ben McLemore (Horatio), and Rachel Steed-Redig (Bel-Imperia) make up some of the most physically beautiful actors one can expect to see on Austin stages.

The Original Practice approach employed by the Baron's Men adds to the magic of the evening, with period instruments such as the harp and recorder providing live music and actors interacting with audience members directly as they would have in Elizabethan times. Jennifer Fielding's Death is an intimidating but not unwelcome diversion as she weaves through the audience and perches like a gargoyle on wooden benches in the galleries. The decision to have female actors double as male characters is a nice twist and maintains the gender-bending spirit of 16th century drama.

End your evening with a substantial spread of meat, cheeses, and chocolates called a ploughman's lunch, and you have the makings of a unique date night or, if your kids are mature enough, a family outing that will feed your family's soul like Disney on Ice never will.