For Mark Pickell, Capital T Theatre is a source of joy

To look at Mark Pickell, you wouldn't know he's just two days away from opening a play. He sits at a table at Epoch, smiling and still, one big Mountain of Steady.

Now, knowing firsthand how many tasks typically need attending to on the average Tuesday-before-a-Thursday-opening, I find it hard to imagine a director with a minute free for anything not directly affecting the show at hand, much less an hour for a little kaffeeklatsch with the press. And it isn't as if the director's beret is the only hat Pickell is wearing for this imminent production of There Is a Happiness That Morning Is; as artistic director for Capital T Theatre, he also has on the producer's cap, and, because he knows a thing or two about how a set works and how one should be lit, he's sporting the designer's cap, to boot. It really feels like there must be at minimum a dozen dangling details driving him nuts – that final coat of paint, that gel that needs replacing, the reservation list! – that he'd rather be scrambling to address than be fettered here, peppered with questions.

And yet here he sits, projecting a serenity that the Buddha would envy.

"Mark is the calmest director I have ever worked with, actually," says actor Katherine Catmull, which is saying something, considering that the directors she has worked with number in the dozens, and There Is a Happiness That Morning Is marks her third go-round with Pickell. "Even during tech week, when most directors, you know, their hair starts looking like they've stuck their fingers in an electrical socket, Mark just starts looking a bit tired."

Pickell's equanimity is something that Jason Phelps, who hadn't worked with the director before signing on with Catmull for the Mickle Maher two-hander, soon noted. "He's very calm about everything and creates a stress-free working space. He's totally open to trying out all kinds of ideas and is clear about what works or doesn't for him and the play. It's been one of the most relaxing rehearsal processes I've had."

That lack of tension can be deceptive, though. Concealed behind Pickell's steady calm are a keen intelligence and strong literary bent, revealed in his deep appreciation of language and delight in "pulling apart meanings and motifs" in the rehearsal room, says Catmull. With the smarts goes "a devilish sense of humor," says Hyde Park Theatre Artistic Director Ken Webster, who's both directed Pickell and been directed by him. Catmull, who's married to Webster, agrees: "He's quite funny himself in an ultra-dry deadpan way, which makes him extra fun to work with."

But then, you might have deduced as much about Pickell from the plays he's chosen for his company to mount, which run from Happy Days, Samuel Beckett's reflection on life and matrimony by an unfailingly cheery woman buried in a pile of sand, to Killer Joe, Tracy Letts' over-the-top tale of trailer-trash sex and murder; from boom, Peter Sinn Nachtrieb's apocalyptic not-quite-a-romance to The Lieutenant of Inishmore, Martin McDonagh's domestic drama mixing unhinged Irish terrorists, bullets, blood, and cats; from Spirits to Enforce, Mickle Maher's meditation on The Tempest with donation-soliciting superheroes on a submarine, to, now, Maher's There Is a Happiness That Morning Is, in which two scholars get so worked up by William Blake's poetry that they have sex in front of their students. While that eclectic batch encompasses the classic and the new, the brutal and the lyrical, the erudite and the profane, one can spy threads running through them if you look close enough.

"This is going to sound weird," offers Catmull, "but I think what characterizes Cap T shows is an odd but sort of luscious combination of 1) humor, often quite black humor; 2) sex!; and 3) a real interest in and thoughtfulness about big ideas – ideas about life, death, love, families, society, etc."

Pickell himself breaks it down even more simply: "One constant throughout all the plays that I produce is that they're smart, that they challenge the audience to use their brains a little bit. And they're entertaining. If you had to nail me down for the two things that I really enjoy, it's being smart and entertaining at the same time." That's led him most often to works that can't be labeled with either a frowning or a smiling mask, "plays that don't say, 'I'm just a comedy,' or 'I'm just a drama.' That in-between ground of dark comedies is one I really appreciate. And so far, I think our audiences have appreciated that mix."

Webster, who's helped Pickell's company create its artistic home at Hyde Park Theatre, will testify to that, as he's had to squeeze more and more patrons – including many of his regulars – into Cap T's shows. "Capital T has been a good fit at HPT for several reasons," he writes. "Number one is probably that Mark's taste in plays and my taste in plays are very similar. Similar but not identical. The shows he produces appeal to HPT audiences, and the number of our regular audience members who have become Capital T regulars has grown steadily over the past six years. Capital T and Mark have also been great for HPT. HPT audiences have come to expect smart scripts, excellent direction, and strong performances from Mark and Capital T. And HPT productions have gotten new audience members from Mark's regular patrons."

Pickell recognizes that his company's success likely wouldn't have come as quickly or steadily as it did without Webster's support and the symbiosis between Cap T and HPT. "I owe tons of gratitude and mentorship to Ken," he says. "Hyde Park, which is, in all actuality, this terrible little space, is amazing and great, and people love to see theatre there. They associate it with quality work and newer plays, newer playwrights, newer thoughts and ideas. Ken comes across as this gruff guy, but he's been a very loving mentor to my company and me."

Pickell also acknowledges that this thriving company of his was never intended to be more than a short-term gig. "Originally, I wanted to go to grad school, and some of the better programs require some professional experience," he says. "So [Capital T] wasn't meant to be anything that lasted seven years. It was meant to last maybe a couple of years so I could get some credits, some reviews, and apply to graduate school.

"What's funny is that I quickly found an audience, and grad school became less and less important – not that I don't feel like I have anything to learn, but at one point I realized that I'm producing the plays that I want to produce and directing the plays I want to direct, and that was more important to me than going into an institution."

So now, seven seasons and two dozen productions in, Pickell has a shelf full of Austin Critics Table and B. Iden Payne awards, reams of gleaming reviews, a theatre space where his work is valued, artists with whom he loves to work, and loyal audience members who will even – as he learned from two attending The Motherfucker With the Hat recently – drive down from Temple to see his shows. And he can stage the kind of play that matters to him, even if it's about a Romantic poet and scholars having sex.

"Mark asked me over a year ago if I'd be interested in doing this play," says Catmull. "When he described [There Is a Happiness That Morning Is], I said, 'Sounds like I'll adore it, but will anyone else?' But when I read it, I really did quite seriously fall in love with it. It's incredibly wise and funny about poetry in general and Blake in particular, about academia, about death, about sex, about marriage – there is a passage where my character describes a series of moments from a long-term relationship that just destroys me with its precision and loveliness. It's a beautiful play."

"As soon as I read it," says Pickell, "I emailed Mickle and asked him if I could lick it to claim it for Austin." But he adds, "I don't know if anyone here would produce this play if we didn't." And as he describes meeting the playwright in Houston – "He's exactly how I would picture him: the smartest person at the table" – Pickell's serene demeanor breaks to reveal a glimpse of joy.

Pickell recalls a line of Blake's that's stuck with him from the first time he read the play: "I happy am." It's this concept, he says, "that happiness precedes being, that I am happy before I even am. It strikes a chord [in me] about who we are beneath all the hats that we wear as individuals. I think Blake would like to believe that, at our core, we're all these babies, these infants, that just find joy in anything. There's a part of me deep down that connects with that or wants to be that in some way."

Before he's finally released to whatever opening-night duties are left on his to-do list, Pickell says, "It's really cool when you stop and think about it, that what I do for my living and what I spend most of my time on every day is what I love, which is theatre." And therein lies the secret to this man's composure: He's found his happy place. 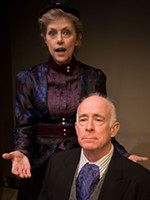 Hyde Park Theatre's A Doll's House, Part 2
Like its source material, this sequel from another mother entertains and inspires on its own terms 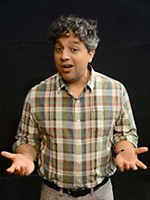