ASO performs Verdi's 'Requiem' to honor JFK in the hall he never reached on Nov. 22 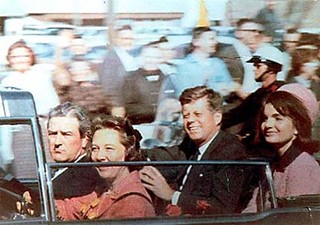 "Where were you when you heard that John Kennedy was assassinated?" That question evokes vivid responses from anyone who was alive and old enough to remember that fateful Friday, Nov. 22, 1963. The question that is less often asked, however, is, "Where was Kennedy headed when he was shot?"

To Austin. That's right. That evening, the president was going to wind up his five-stop tour of Texas with a fundraising gala for the State Democratic Executive Committee at Austin's Municipal Auditorium, where the Long Center now stands. Barbecue was – of course – on the menu. The plates were set, the decorations were in place, and thousands of people were expected, but the guest of honor never made his appearance. The large hall bustling with hope and enthusiasm quickly turned to one of despair and mourning.

Exactly 50 years later, the void left in that space will be filled by musicians of the Austin Symphony and Chorus Austin. They will perform Guiseppe Verdi's Requiem, one of the most fitting pieces possible to commemorate the anniversary of JFK's assassination. The musical form of a requiem is a Latin mass for the dead. Although requiems originated in a clear liturgical setting, Verdi wrote this piece in memory of the novelist and poet Alessandro Manzoni. The piece was not written on commission, but in a gesture of Italian patriotism. Verdi simply admired Manzoni and wrote the work as a moving tribute to him as a man.

When Verdi's Requiem premiered, some critics judged it "too operatic" for a religious work. For audiences today, though, the monumental power of the piece is what resonates with them. The high drama that Verdi creates in the hour-and-a-half work – scored for a large orchestra, double chorus, and four soloists – is quite fitting for the human emotions involved with death: grief, fear, solemnity.

Verdi's writing exploits all of the dramatic potential of the ensemble, and then some. The orchestra at times plays a quadruple fortissimo (essentially, as loud as humanly possible) and the soprano soloist sings a high C (the note that shatters glass in commercials). When conductor Arturo Toscanini performed this work, he went on a search for the largest bass drum he could find. He eventually found it at the University of Chicago. Years since those performances, this bass drum has been painted burnt orange, adopted by the Longhorn Marching Band, and renamed Big Bertha.

Verdi was born exactly 200 years ago this month, so this masterwork is being programmed seemingly in every town on the planet. Now it's Austin's turn. Here, though, it will resonate with secondary meaning as a tribute to Kennedy. Later in November, Austin Lyric Opera will jump on the Verdi bicentennial bonanza bandwagon to present Don Carlo.