A "tonally appropriate human being"? No, just John Oliver

The role of filling a legend's shoes is often a fool's errand. But when The Daily Show with Jon Stewart's anchor chair was occupied for two months over the summer by its snarky "Senior British Correspondent," John Oliver, few complained. By most subjective critical standards, Oliver shined in Stewart's stead by personalizing the role without re-inventing the wheel; producing speculation that the 36-year-old English comedian, actor, and Daily Show writer may one day inherit the throne for keeps. The Chronicle spoke with Oliver about his summer job and more in advance of his Oct. 25 stand-up performance at Bass Concert Hall.

Austin Chronicle: Did you read your own press during or after your stint filling in for Jon as Daily Show host? Or was it scary enough just driving the ship?

John Oliver: I tried to avoid it, to be honest. It was plenty scary enough steering the ship. I felt that if I got too distracted, terrible things could happen. I think the captain of the Titanic might have hit the iceberg because he was too busy reading newspaper articles about how well he was sailing, got carried away with his own press, and then next thing you know, boom: Leonardo DiCaprio is in the ocean.

AC: You recently said of interviewing, "I'm not qualified to sit down with a world leader and have a broad-ranging discussion about the issues of the day, because there are instincts that I have that are inappropriate in that scenario." Was the job of conducting tonally appropriate interviews your biggest stressor this summer?

AC: Is it an ambition of yours to host your own satirical news program like The Daily Show or The Colbert Report someday?

AC: Your character arc as Professor Ian Duncan on Community is rather tragic. He's a lonely alcoholic who's plateaued at a "college that correspondence schools make fun of." How enjoyable is it to portray someone so comically bleak?

JO: It's a huge amount of fun. I also grew up loving tragic characters like him on sitcoms in the UK. In fact, most beloved British sitcom characters are broken people. Steptoe and Son hated each other, Alan Partridge is a failure, Basil Fawlty hates his life, and Reginald Perrin tries to commit suicide. There's something about deep misery which British people find innately hilarious for some reason.

AC: Your formative experiences as a stand-up came from inside British comedy clubs, which you've described as "the front lines of entertainment." What early lessons were gleaned from routinely performing to combative audiences?

JO: The main lesson you learn is that you're terrible and that you need to try harder. Dark rooms of drunken strangers then teach that lesson to you loudly, and repeatedly, until you have either gotten better, or have given up.

AC: You'll be performing within shouting distance of the Texas State Capitol here in Austin. Who or what about Texas politics do you find most absurd or loathsome?

JO: There is little about Texas politics that isn't ridiculous, to be honest. That is both the best and the worst thing about it. There are so many characters that you should be simultaneously grateful for and ashamed of, but Rick Perry is very hard to beat.

AC: You gave a red-carpet interview at the Emmys saying you'd rather be watching the latest episode of Breaking Bad in your hotel room. As a fan of the show, how'd you like the series finale?

JO: I loved it. Mike from Breaking Bad is actually in Community this season, and doing scenes with him is awesome. The actor's name is technically Jonathan Banks, but as far as I'm concerned, in real life he'll always be a dead meth-dealing criminal called Mike. Oh, spoiler alert, by the way. 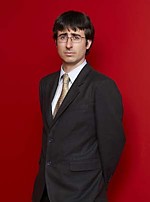