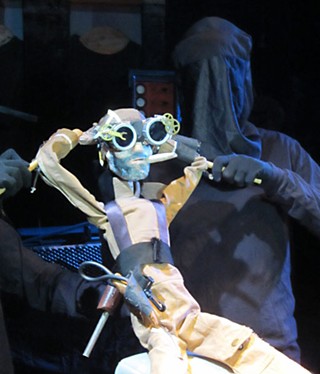 The Mechanic won't let you panic: the head guy at work in The Head (Courtesy of Trouble Puppet)


Everyone with any experience with the condition has their own metaphor for depression: the "noonday demon," the "black cloud," the "dark cave." For Connor Hopkins, the Trouble Puppet Theater Company artistic director who wrote, designed, and directed The Head, the metaphor – perhaps unsurprisingly – involves puppets.

There's a little man, the Mechanic, who lives in the titular head of the Man, the play's protagonist. The Mechanic's job is to keep the Man's life functioning, making sure he gets enough sleep, drives safely, takes care of work responsibilities, etc. To do this, he hops around a workshop inside the Head that looks like a cross between pure steampunk and an Eighties Atari 2600 game console – lots of bright lights and joysticks, as well as random gears, gauges, and levers. The stage is expansive, and the Mechanic, who uses a system of pulleys and catapults to get from one side of it to another, seems like he works pretty hard at his job.

He has to, because in Hopkins' metaphor, the part of your head responsible for keeping you functional spends a lot of time agitating against the parts of your head that are out to betray you: the demons.

For all its moodiness and tone-setting, The Head's primary conflicts are meandering: The Mechanic tries to keep things going, while the demons pop up to wreak havoc and mischief. It's a game of whack-a-mole for the Mechanic, as failed coping mechanisms like Why The Fuck Not? and the Overthinker sabotage the Man's daily life – urging him to the destructive impulses of, say, And Furthermore, Fuck You, when the Mechanic would much prefer to calm down an escalating situation.

All of this plays out in a showcase for Trouble Puppet's builders and puppeteers. The stage is lovely, and the puppets are charismatic – one demon looks like a chicken, another like a lizard, another like a warrior in a suit of armor. Between the feats of the puppets in traversing the stage and their weird, but somehow charming, designs, The Head's devised a few clever ways to keep things engaging in a play that, by the nature of its subject matter, is set up to be repetitive. (It's not like it's going to end with the Man overcoming his demons, after all – the moody score by Justin Sherburn, the creepy stage set-up, and Hopkins' commitment to the metaphor he's crafted make that clear from the beginning.)

Instead, we get an ending that's as personal and idiosyncratic as the various demons who make the Mechanic's life hell, and as Hopkins' man-as-puppet, mechanic-and-demons-as-puppeteer metaphor itself. It's a bit unclear what's happening, but in a play about depression and personal demons, some confusion seems to fit the bill – and as Hopkins concludes that your bad impulses and self-loathing are still a part of you, but true depression is not, The Head ends with a statement that's as intensely personal as you'd expect from a play focused on exploring struggles with mental health. The Head may not work for everyone, but when dealing with a subject that everyone experiences differently, it doesn't have to.