Life lessons from the mortuary to the theatre 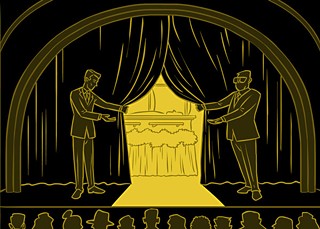 If you're a Central Texan, chances are fairly good that you've seen Bernie, the dark Richard Linklater comedy starring Jack Black in the title role. I saw it with a friend a few weeks after the movie's release and remember vividly the opening scene of Bernie's return to his alma mater as a guest lecturer ... on the process of embalming. My fellow audience members shifted uncomfortably in their seats and let out gasps of "eeew!" I, however, smiled quietly, for I knew what many of them did not: that the onscreen depiction of the process of preparing a body for viewing was spot-on.

So how do I, a theatre guy from the rural Midwest, have any clue as to the accuracy of that scene?

Answer: My family is comprised entirely of funeral professionals.

And they're coming to town.

The National Funeral Directors Association will be holding its International Convention & Expo Oct. 20-23 at the Austin Convention Center. Like most conventions, there will be networking events, continuing education seminars, and new products on display. But when everything is packed up each night, funeral professionals from around the world will have the opportunity to experience Austin's cultural offerings.

The image of a funeral directors' convention in a city chock-full of theatre got me to thinking about how my own experiences with funerals have had such an immense influence on my professional approach to the stage. I realized that not only has my view of life been profoundly shaped by death; so, too, has my work in the theatre.

The lessons I've learned from my family's approach to its profession could fill volumes, but here are a few with particular resonance for me.

Lesson No. 1: Realism Is an Art

Perhaps the most obvious correlation between funerals and theatre is in the body's physical presentation, whether the performer's or the deceased's. Just as the theatre has its behind-the-scenes artists, so do funeral homes. Costume designers, makeup artists, and special effects masters are instrumental in achieving a sense of realism onstage. As Jack Black demonstrated in Bernie, funeral directors serve much the same function in preparing a body for viewing.

For as long as I can remember, my dad has been a master at all things restorative and prosthetic; families bring in photos of their loved ones in life, and somehow Dad always seems to be able to translate the qualities in them to the departed with astonishing naturalness.

To attain the skills necessary for presenting the most holistic and "real" image of the body for viewing, embalmers-in-training take classes in restorative art, learning to re-create and reshape features that may have been damaged in death. One of my sister's assignments in mortuary school was to bring to class three photos of a celebrity, from which she would re-create that person's likeness in clay. She chose Elvis. Now, she received only a B+ on that assignment (apparently the nose just wasn't quite right), but despite that, she has become a truly A+ makeup artist.

To create a space that encourages feelings of reality (when it's desired in theatre) is an art, as is the evocation of a sense of reality in the viewing of the deceased. Both onstage and in the funeral home, evoking the potential for perceived realism is truly an art.

Lesson No. 2: A Little Humor Goes a Long Way

In fifth grade, my class was given a how-to assignment. You're probably familiar with these from your own elementary school years: You pick a topic or an action and teach the class how to do it. Not to be outdone by my 11-year-old colleagues, I decided on a topic that would be unique and meaningful. The title of my demonstration? "How to Embalm the Human Body."

I grabbed my younger sister's "life-sized" doll, placed it on one of the funeral home's gurneys, acquired the necessary "props" from Dad, and wheeled my way into the classroom. The expressions on my classmates' faces were not unlike those I observed all those years later at the movie theatre during Bernie. Everyone's eyes were wide: some with intense curiosity, others with shock, and many with a twinkle of amusement.

Wait ... a "twinkle of amusement"? Was the presentation I created in a fifth-grade classroom that brisk fall afternoon a farce? Not really. What I was learning from growing up around so much death was the necessity for a sense of humor in life. Although I didn't actually live in the funeral home, I spent a lot of time there and wanted my friends to be comfortable "coming over." I had learned early on in childhood that death is a very distancing concept for many (maybe even most) people. The tinge of humor – and gigantic dose of theatricality – with which I'd chosen to imbue my presentation would, I hoped, do a little to make my classmates more comfortable with one great certainty of life.

It was then that I realized that theatre wasn't just about the singing and dancing of the community musicals in which I was taking part. It could also be a vehicle for bringing audience members closer to otherwise distancing topics. And oftentimes, even the smallest dose of humor can make those subjects that we find hard to experience, be it the death of a loved one or a difficult but important topic, a little more bearable.

Lesson No. 3: Catharsis Is Key

In the tiny, rural town where my family owns and operates its funeral home, it's fairly uncommon to experience a funeral without viewing the body unless direct cremation has been chosen. Of course, not all faiths or cultures favor a viewing of the deceased, but there are other ways to achieve catharsis and celebrate the life of the departed that are just as meaningful.

See, funerals aren't really "for" the deceased. Yes, of course, they're memorializing events that encourage meditation on a person's character and accomplishments. But they're really for those who are left behind, often attempting to comprehend death, and forced to come face-to-face (literally, in the case of most funerals back in my hometown) with it, knowing that, one day, "that will be me."

This element of catharsis – which I use here not in its literal sense of "cleansing" or "purifying," but in a more colloquial connotation of emotional release – is really the crux of where funerals and theatre intersect for me. The most rewarding aspect of my work in the theatre is the opportunity to share an important story onstage, to open a dialogue between audience and performers, to blur the lines of reality and ask "what if?" Like a funeral, the theatre has the capacity to create a cathartic space where we confront difficult topics, share stories, and laugh together – even through the hard moments. Invariably, we recognize that the characters onstage might not be that different from ourselves, and the epiphany of "that could (will?) be me" is not so distant a thought.

Looking back, perhaps the most profound lesson I've learned is a sentiment shared by funeral professionals and theatre practitioners alike, summed up beautifully by a Broadway man, composer-lyricist Irving Berlin: "The song is ended, but the melody lingers on." If we can help the melody linger a little longer for just one family or audience member, then we've succeeded. 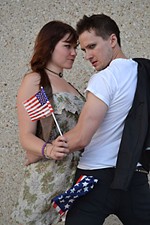 All Over Creation: Continuing Education
Turns out theatre is a great place for getting schooled